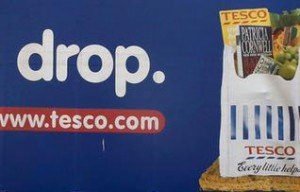 Tesco have dropped plans for the Amble supermarket

Tesco have cancelled long-standing plans to build a supermarket in Amble. In a statement, Tesco’s new boss Dave Lewis announced plans to close 43 “unprofitable” stores and to cancel the construction of 49 “very large” stores.

The Amble supermarket was also included in the cancellation announcement, despite not being designated one of the larger outlets.

Ann Burke, chair of Amble Business Club told The Ambler: “It’s very disappointing that Tesco are pulling out. It’s sad for the town because we’re now back to nowhere but expensive shops for food. The employment would have been good for the town.”

Director of Amble Development Trust Julia Aston said: “We are extremely disappointed, especially after all this time. Sadly the announcement had been expected given the poor trading figures, but we had been reassured – even up to quite recently, that their intention was still to invest in the town. Our biggest disappointment is that the jobs will now not be created – which is what the town desperately needs.”

Amble Town Council also expressed their disappointment at the news, vowing to continue to encourage developments which will encourage employment opportunities. 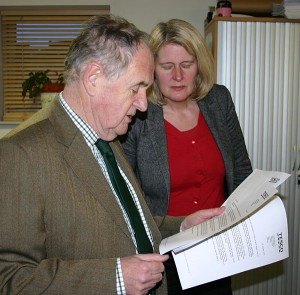 Sir Alan Beith MP visited Amble on the day after the cancellation. He told The Ambler: “The announcement leaves a big gap for the economy of the town. It is very disappointing. It’s true the location was controvertial, but it would have contributed a lot to the town centre and brought many jobs. Northumberland County Council are going to have to start thinking and talking with Tesco, who are offering to be as helpful as possible.”

Liberal Democrat candidate for Berwick Upon Tweed Julie Pörksen who accompanied Sir Alan on his visit said: There are three main issues: what will happen for the site, what other serious employer can be attracted to Amble and what impact will it have on parking? Parking and employment are the main issues people talk to me about in Amble.”

When plans for the store were first announced in December 2010, Tesco intended to create 150 jobs for local people. The plans for the “eco store” were described as a massive boost to the local economy. Over the last four years, several delays and a redesign were announced, and in September the derelict buildings on the site were demolished. 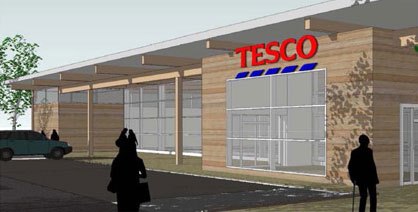 This is what Tesco CEO Dave Lewis had to say:

“It is with a heavy heart that I announced that we are unable to proceed with 49 planned new store developments across the UK, including our planned store in Amble.

Our performance as a business has fallen significantly short of where we would want it to be and my absolute imperative has to be to protect the future of our business for the c. 300,000 colleagues we employ in communities all over the UK.“

I know that this news will be a real disappointment to many people in the local community and we’re extremely grateful for the support we’ve received for our plans. I am very aware of the importance of the site to the area and I am determined that we will work closely with Northumberland County Council to find the right solution for the local community.”

The Braid Hill site occupies the land north of the Gut. The location was not universally popular with Amble residents.

The plans for the 30,000 sq ft supermarket caused controversy in Amble, with many people unhappy at the prospect of the Braid Hill site being used for retail and housing. An access road would have connected the development, running alongside the burn known as the Gut, to the A1068.

In 2009, outline planning permission was also granted on the Braid Hill land for 46 new houses and flats, including 35 per cent affordable housing for local people. Tesco did not submit plans for housing in their Braid Hill development.

The majority of the Braid was designated Village Green status in 2009, after local residents set up a campaign to protect the recreational area from development.