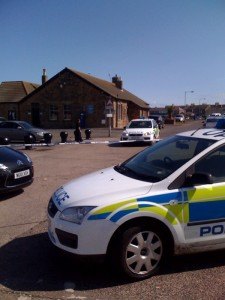 Police were called to the Harbourmasters Office today when a suspected second world war explosive device was handed in. People working in the building were evacuated until the Bomb Squad had been appraised of the item.

The item, described as ‘a piece of old metal’ was believed to have been found on the Little Shore and was taken to the Harbourmaster. Thinking that the object may have been an old cartridge and because it had been found on the shoreline,  the Coastguard was then informed.

“The next thing we knew was when the police turned up” said a spokewoman for the Harbour Commisioners.

Amble Town Council’s offices are based in the Harbourmaster’s Office and clerk Elaine Brown was one of those evacuated. She said ” After about half an hour the police came out, everyone was smiling and they said we could all go back in and that it was all OK”