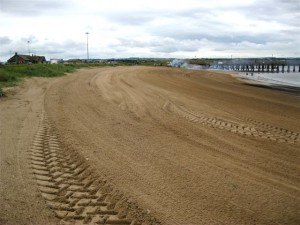 About 35 people turned out at our last beach clean, including the Coast Guards. The work was quite laborious, especially when you are getting on as they say.

The youngsters who came enjoyed the day and some had chips on the beach afterwards. Some of the older people had bacon or sausage butties made by Anne Grey to fill a gap till teatime, and Anne Brown made tea and coffee for us.
Personally I was delighted with the work the machine did and we are all very grateful to the County Council for the loan of this vehicle and the driver who stayed with us all day.

There is still a lot of work to do but with work still to happen in mid August we might see a big improvement again.
Thank you to everyone who took part and helped me with everthing especially the support you gave. May this little part of our heritage stay with us in the present or even better condition and someone will always look after it. It is after all something to be proud of and a place for children and adults to share.
Audrey Jones,
Ladbroke St, Amble

More of Sir James Spence
I read with great interest the item ‘Name change for local schools’.
In 1947 I was born in Newcastle upon Tyne and children born in May and June of that year became involved in the ‘1000 Families’ research project at the RVI instigated and organised by Sir James Spence and his team with support from Newcastle Council. We became the ‘Red Spot’ children, so-called because of a sticker on our medical records.

The initial study was to be for one year to investigate the high infant mortality rate and depravation in areas of Newcastle after WW2 but the project continued until 1962. Each birthday we received a special card and went to the RVI where we had various tests to monitor our health and general progress. In between times a district nurse visited us regularly at home. Many children remember the ‘jelly patches’ that accompanied these visits.

When the funding was available we had further visits at age 22, 33 and 50. Earlier this year, in time for an ‘MOT’ at 62, I completed a detailed health questionnaire and spent a day at the RVI. As well as having the usual tests I took part in various individual research projects into ‘joints’, ‘gait’ and had MRI scans.

Over the years there have been a number of articles published using the information gleaned from these 1000 ‘children’ who have chosen to remain involved.

I did not realise that Sir James Spence had been born in Amble but it is a very appropriate name for the new school to inspire our local children as he did by his interest, commitment and involvement in improving the health of all children.
Veronica Lisle, Kirkwell Cottages, High Hauxley

Help for war veterans
The A.N.A.F (Army Navy Air Force Help Support & Advisory Group) is said to be the only charity dedicated to helping war disabled. A true charity staffed by unpaid volunteers. No salaries or gratuities and we are proud to be part of such a group. We have raised funds to ensure a better standard of living for war disabled veterans and their families.

Many thousands of people have benefited from our fund raising and the benefits we provide with the help of so many friends and sympathisers. Our organisation was originally formed in 1968 to assist severely handicapped people in the four northern counties of England and the Scottish Borders

War veterans in genuine need are guaranteed our assistance, from all manner of domestic appliance replacements, household goods, clothing, home decorations, holiday breaks and hundreds of other essential benefits denied many veterans for various questionable reasons.

Many war pensioners have been assisted in obtaining pension awards, and several have had their pension percentages increased with our help and advice, even via tribunals which many pension applicants will be aware of. Our success rate is 99%

Our first contact with any veteran or his or her family member is preferably by telephone or e-mail: kenhatton@btinternet.com.

To date we have raised several millions from sources wishing to help disabled heroes, and every penny raised is paid directly to the vendors of the goods and services for the veterans. We pay our own expenses. 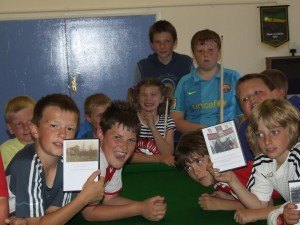 Amble Social History Group produce DVD slideshow of old and new photos of Amble and district provided by members of the public. We also produce books about the area. All profits go to local good causes.

Our latest donation was to Amble Boys Club. We paid for their pool table to be recovered, bought new goal nets and footballs, a table-top freezer and paid for the bus for a trip to the Discovery and Hancock Museums as well as other smaller items.

We are urgently in need of photos for our 4th DVD. Could anyone who has old or new photos of Amble and district or of Amble people please contact Andy or Mary Sim on 01665 710847 or Frank Swinhoe on 01665 710262. We can scan your original photos and let you have them back quickly.
Frank Swinhoe, via email

Many thanks for printing my letter – lovely photo of Island View, there will be people who know my name and remember me – no Gordons live in Amble now – back in the late 60’s, 70’s, 80’s the name of Gordon was notorious.
My time at Island View was ‘bitter sweet’ (I literally built the extension to the front of No. 6 with my husband and help of local man) it was pure Catherine Cookson, it was all there, family feud, property dispute, the original mother-in-law from hell, drunkeness, illness, death, treachery, wilful betrayal, which resounds to this – a real blockbuster.
I am told I should write all this down but it is too fantastic to have happened to one person.
Oh, Happy Birthday – I have only just bought myself into the 21st century with a computer so have missed 10 years of you.
Could you please send me a copy of The Ambler, I enclose cheque to cover costs and donation to the vital tea/coffee/biscuit fund.
Kind Regards
Sally Gordon
Devonshire Road, Prenton

Please find attached two photos of Island View (Salt Pans) which were taken 60 years apart.In the last edition of The Ambler there was an article on Island View and I thought these photos may be of interest to your readers.
The older photo I purchased as a postcard from the internet and it was sent in 1948 so the photo must have been taken around that time.

The newer photo was taken in 2008 and I tried to capture the same spot but erosion of the links made this difficult but it shows the outline of the wall has hardly changed in 60yrs but the houses definitely have. 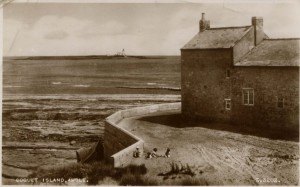 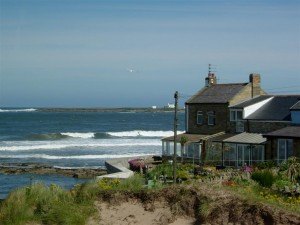 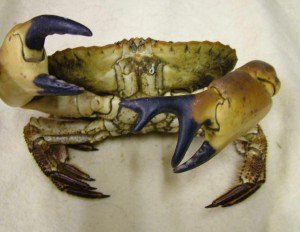 8 thoughts on "Your letters & email:Sept"