Fighter planes flying from R.A.F. Acklington.
Miners returning along the links from Hauxley, blackened by coal dust.
Hill sixty much taller then.

One of the first radio location ‘Radar’ masts near the hill.
Tank traps and lots of barbed wire, eventually dumped in the quarry.
Marked minefields along the links. 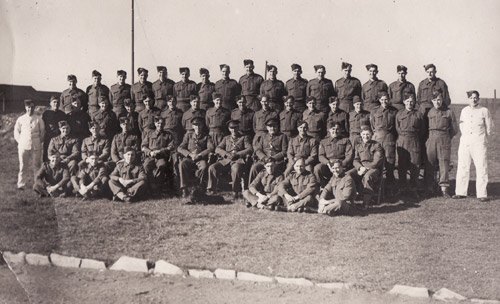 Army billets opposite the granary and a large gun on the front.
Another army billet below the cliff house again with a large gun facing the harbour.
Ned’s café, formerly the old golf club next to the East Cemetery.

The harbour full of coal boats with their barrage balloons dancing in the wind.
The tug and the dredger.
The R.A.F. rescue station across the north side.
The old little shore, much better then, full of mothers and children.

Swimming in the bottomless quarry.
Jumping down the Salt Pan Sand hills.
Fishing for sprats in the “houses of parliament” under the pier at the little shore.

Swimming in the dock to a large audience and jumping off the staithes and the dolphin.
Drying off in one of the extremely hot brick kilns in the long gone brick yard.
In those days for some old custom you had to have a swim by Easter, it was always freezing.

The fish market with all the fish displayed.
Molly Baldwin’s concerts.
Tommy Alder the school masters singing lessons, not enjoyed then but the songs fondly remembered now.

Buying a dash ‘beer and lemonade’ at Aggies Harbour Inn.
Matthews boat yard.
Carse’s stone yard next door at the right of the show ground.
At the show ground itself, taking up both sides of the road at Amble feast, full of amusements and rides and of the course the older men drinking and attempting to climb the greasy pole down the harbour.

The Gut was a great dirty muddy place to look for crabs with steppy stones across to the Braid.
Beauchamp’s field beside the Gut, a great place to explore and to climb past the sawmills to the Warkworth road.
The Wesleyan church on High Street for Sunday school and where the great Brian Nun started the seeds of the Boys Club.

The Boys Club where the fish shop is now, with Jock in the canteen, a library, billiard room, gym and a work shop for the then modern plastic. Brian Nun formed a boxing team, swimming team, football teams and even a drama group. There was also a hot tub full of boys with an infra red and ultraviolet lamp to keep us healthy. A well attended venue was the tented camp across the Black Bridge. Brain was a true leader often at his own expense.

The Dead Mans hut below the Club.
We climbed among the uncompleted building work in the new school in South Avenue.

There was bird nesting expeditions up the Green Lonnen, not PC now, and at the right time scrumping for all sorts of produce all over but especially Warkworth.
Cycling to Ashington baths, tucking in behind the number 10 United bus to be sucked along quicker.
Waiting for ages to cross the line avoiding the tankies at Percy Street.

The memories along with the changes are probably endless and can no doubt be amended or added to.
Though initially the war was on it was still an exciting and enjoyable time for a young boy.
I haven’t lived in Amble for forty years but still have happy memories of a long ago childhood.

4 thoughts on "Memories of old Amble"