PARRT payment to save animals 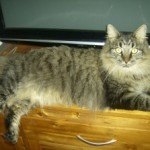 Animal rescuers facing a record intake of abandoned and neglected pets have had a welcome four-figure cash boost. The Amble-based People’s Animal Rescue and Re-homing Team (PARRT) has received nearly £1,500 in donations in the past month along with gifts of animal food and items for its shop in Church Street.

The money, which includes two £500 donations and a £200 cheque, follows the organisation’s recent Fun Dog Show in Warkworth and publicity about the plight of the cats and dogs rescued by PARRT.

Said Linda Wilkinson, PARRT founder: “The generosity of local people, who have heard about what we are trying to do, has come as a very welcome boost. It’s given everybody involved in our work a real lift. With the individual donations and the money we raised at the show, our coffers have been swollen by nearly £2000.”

The cash will help towards the organisation’s aim to raise the £30,000 needed each year to keep the service going.
Since the organisation ( www.parrt.co.uk ) started in 1998, some 4,500 animals from all over the country have been found new homes. But it is facing an uphill struggle this summer as it records its biggest-ever intake of animals.

“Many people have genuine reasons for calling on us: maybe illness in the family or an owner has died. And the credit crunch has caused some owners to give up on their animals because they can’t afford food and vets bills. “However, there are a small minority of people who regard their animals as disposable items that can be dispensed with once they get a bit older in favour of a younger animal,” she added.

The problems are compounded by increases in the cat population caused by owners not getting their animals neutered.
“We will never put a healthy animal down, so getting more help to cope with the growing numbers of neglected and abandoned animals is a huge problem.

“We have a fabulous team of helpers and animal foster carers, but we always need more volunteers to help us as well as people prepared to adopt one of the dozens of cats and dogs currently awaiting a new home,” she said.

One thought on "PARRT payment to save animals"