Paul hands over to Paul 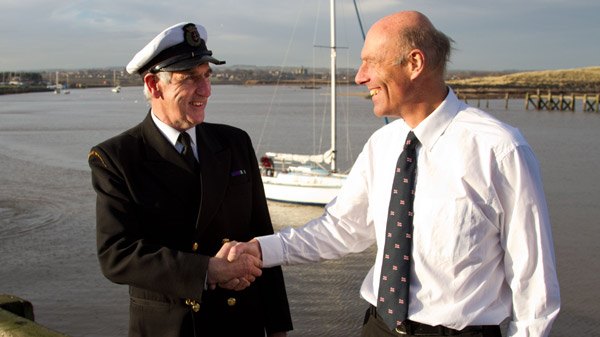 Paul Allen, who until recently was Head Teacher at Coquet High School, has been appointed Harbour Master by Warkworth Harbour Commission, following the retirement of Paul Taylor, who has been in the post since October 1991.

Paul Allen has been an active member of Amble Lifeboat for 13 years, and is an experienced yachtsman and keen sea kayaker. He is well known in the local community and has considerable experience of working with local authorities and funding bodies.

Paul told The Ambler: “After 15 years as a head teacher, I thought it was time for a change. Then the post of Harbour Master became available and I applied for it. I have had a long term interest in the sea and I also have a good deal of administrative experience.”

Maurice Burnett, chairman of Warkworth Harbour Commission said: “We are delighted in appointing Paul Allen as the new harbour Master, a decision made extremely difficult due to the quality and calibre of the candidates.”

Paul said “Amble is a great community and I’ve always been interested in maritime matters. I will enjoy the variety and I don’t mind getting my hands dirty!” This was aptly illustrated when we arrived to talk to him. He was standing on the quayside in his boiler suit, with oily hands, answering a query from a woman out walking her dog. He still has reports to write and meetings to attend, but he is certainly not desk-bound.

He says, “My vision is to develop the leisure and pleasure aspects of the harbour, following in Paul Taylor’s footsteps, making the area an amenity for locals and tourists. I want to make the name ‘friendliest port’ a true description for visitors, whether they arrive by boat or by foot.”

He believes that both jobs – Headmaster and Harbour Master –  involve building relationships with people, working with others to achieve goals. Paul is grateful for his welcome from the port users, particularly the fishermen. He also has a good working relationship with the town council and the Development Trust, which pleases him.

Maurice Burnett also paid tribute to the retiring Harbour Master: “On behalf of the commissioners I would like to extend my thanks to Paul Taylor, who has given outstanding committed service to the harbour and its users and the community. .”

Paul Taylor has mixed feelings about leaving. “I’ve been involved with the sea since I was 15”, he said. “The best bit of the job was all the interesting people I’ve met – visiting fishing vessels, meeting old friends, or talking to tourists who want to know about harbour life.

“There have been great changes at the harbour and I like to think that they were all improvements and that I was an influence in achieving them.”
Norma Hinson

2 thoughts on "Paul hands over to Paul"