Bullets on the beach

A hoard of old bullets has been uncovered on a local beach, and readers are being asked to help solve the mystery of why they ended up there.

Jill Mallen (pictured below) and Pippa Robins were walking their dogs along Hauxley beach at the end of March when they discovered the huge collection of bullets scattered about in the mud and sand.

“Pippa spotted them first” said Jill “She picked one up and we wondered what it was. I said ‘Is it a bullet?’ but we also wondered if it was a bone or a tooth. Then we started to see loads of them in threes and fours. Some were buried in the mud. They looked like sardines almost.” 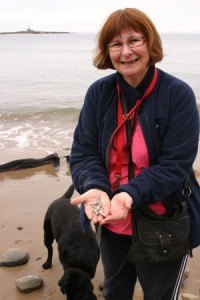 After filling two doggy bags with the objects, they decided to call the police.

“We weren’t sure if they’d been scattered by the tide, or if they’d been dropped. If they were bullets and if children found them, we were worried – from a safety aspect – we decided to call the police. They arrived pretty promply, had a look and then we took them to where we’d found them. They picked up quite a few more. The police must have taken away about 100. We collected about 70 ourselves.”

According to police firearms experts, the objects were formally identified as very old spent bullets. Since then several people have recounted stories of the dunes being used as a firing range during WW2.

“We would love to know how old these bullets might be and how they got there” said Jill.
Can you help?

3 thoughts on "Bullets on the beach"