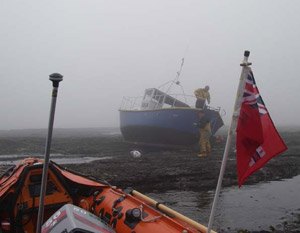 The RNLI lifeboats had a busy Easter, with two callouts resulting in both the Inshore and All Weather lifeboats being required.

Both Amble lifeboats were called out to rescue pleasure boat Pride & Glory on Good Friday as it ran aground in thick fog. This is the third time the vessel has required the assistance of the lifeboats in the last twelve months.

A spokesman for the RNLI said “It is not uncommon for Lifeboat Stations and our volunteer crews to attend callouts for the same vessel(s) over a period of time.
However, sometimes things can be done by boat owners to minimise risks when taking to sea and the RNLI is happy to offer advice in this respect. It is in everyone’s interest to be as prepared and well equipped as possible when a vessel goes to sea.”

Mechanical failure was the cause of both previous callouts.

At 10.30hrs Friday 22April  ( Good Friday ) On receiving a MAYDAY call from the 25/30 ft  Pleasure boat  “Pride and Glory” with Five persons on board The HMCG requested the launch of both Amble Lifeboats.

The  “Pride and Glory “ had run aground in thick fog on to rocks 400m South of Amble Harbour Entrance.  Fortunately the sea was slight at the time or it would have been a very serious incident with the lost of the boat.  By the time the Lifeboats arrived the tide had receded rendering it impossible to recover the boat.   As the tide receded  further  the Amble Coast Guard team were able to escort three of the persons on board  ashore across the rocks in the thick fog.

It was noted that there were lifejackets available for all parties on board. As the tide was very low it was decided for both Lifeboats to remain on scene and keep watch as two persons had remained  on board in the hope of refloating the boat on the incoming tide.
As the tide returned, even with the slight swell at the time, damage was caused to the hull and the rudder was disabled.

Three of the All Weather lifeboat crew were placed on board the casualty and a tow rope was taken on board. With the help of the inshore lifeboat the casualty was safely towed back into Amble harbour.

The coxswain of the Amble ALB  said “Great care has to be taken when sailing boats in weather when there is a chance of fog coming down and one should not sail with out a good local knowledge of the  area in which one is sailing.

On this occasion all persons were safely recovered plus the boat.”

At 20.45hrs (8.45pm) on 21 April the Humber coastguard requested the assistance of both Amble Lifeboats to help in the search for two children who were reported missing  whilst on a fishing trip at Lynemouth beach.

There was thick fog at the time and although  the Inshore lifeboat was out on an exercise at the time the Allweather lifeboat was launched to escort the inshore Lifeboat down to the Cresswell area  where it joined the Newbiggin Lifeboat which had also been requested to help in the search.

On arriving at Cresswell  the lifeboats where requested to stand down as the two children had been located, but because of the thick fog the lifeboats remained on scene till all the search parties had been accounted for.

The coxswain of the Amble ALB  said “ We are very pleased the children had safely found their own way home and they the crew of the Lifeboats do not mind being call out in such circumstances, and that all parties were accounted for save and well, and we had a happy conclusion to the call out.