So we are to get our very own Tesco by December 2012. It’s ironic that the Cheviot Foods site is vacant now, which many of us thought would be the perfect location…

Many issues still concern some of us about the outline planning application by Northumberland Estates to develop the Braid site as the preferred location for the supermarket;

The only retail impact assessment was carried out by the developer who was hardly impartial. We only knew it was Tesco after the planning permission was granted.

It transpired (we found out under the Freedom of Information Act) that Alnwick Council had promised to sell part of the Braid to Northumberland Estates for development. This was undertaken in secret, without any public consultation or discussion. We have been blocked in any attempt to produce the minutes when this sale was agreed, despite further requests under the Freedom of Information Act.

What however concerns me is the housing issue. Councillors at the relevant Northern Area Planning Committee approved outline planning for not only the supermarket and 200 parking places but also for 28 houses, 10 of which were affordable. The planning application states explicitly that the housing element was an integral part of the application; also that the supermarket was not economically viable without it. We found this a bit strange even at the time, because no new houses were being built at Marks Bridge or the boatyard even though they had outline planning permission.

Obviously, the economic climate has militated against building new housing but the developers were perfectly happy to create the impression that housing would be built on the Braid site.

One can only conclude that the housing element was just a ploy to induce the Council to grant planning permission and as a consequence the original application has fundamentally changed without, apparently, anyone noticing or questioning it. Any local people hoping for an element of ‘affordable housing’ have been cruelly misled.

Incidentally, the £60,000 Tesco agreed to help induce Amble people to accept the scheme was defended by our MP but we should have asked for a million pounds (a trifling amount considering Tesco’s profits) which would have rebuilt the damaged pier and helped keep old people’s homes open and provided more facilities for an increasing number of unemployed youth. We seem to have been treated throughout this with contempt.

Last point; if housing is actually built on the site before the outline planning permission runs out I will issue a craven public apology. 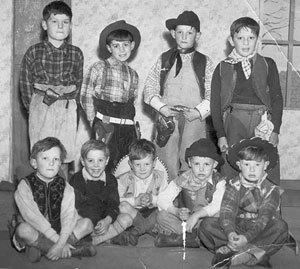 This photo was taken on the stage at the Methodist Church on Percy Street around 1952-56, I’m not sure. We sang a cowboy song!!!!!

I am not sure about first names as we called some by nicknames. All lived in Ivy Street except Tony Hamburgh who lived in the first house on Leslie Drive. I apologise if I have got names wrong. I would be pleased if someone could correct me.

As secretary of the Christmas Lights Committee, I would like to sincerely thank the community for all their support. Thanks go to our main sponsors, Amble Town Council, Pier 81 and Quayside Chippie, but also to all the community groups, businesses and individuals who support us financially. Without your support there would be no lights. And thank you to Amble Development Trust for providing us with storage and workshop space.

Special thanks to Peter Stewart of Amble Skips and Geoff Singer who provide transport free of charge. Last, but certainly not least, thanks to ‘our lads’ who work all year repairing and renewing. Thank you for a truly magnificent display.
In April we hold our AGM and anybody who is interested is welcome to attend.

Wishing you all a merry Christmas and a happy New Year.

Kate White contacted us via our website and asked, ‘Can readers of ‘The Ambler’ throw any light on the following – engraved on a small wine glass owned by my father: ‘Success to Prospect Terrace, Amble 1895′. I’d be really interested to hear from anyone who knows what this is about. I know (or think I know) that the Amble Local Board became the Amble Urban District Council in 1895 … but is there a connection?? Does anyone know when Prospect Terrace was demolished – or renamed? I know it existed just after the 1st World War but I have not been able to find out anything else. Thanks!’

Julia Aston responded: ‘If memory serves me well, I’m sure the ‘very’ small terrace was on the site which is now the Co-op car park at the top of Queen Street.

Peter Cannon reported that: ‘In 1926 there were six dwellings in Prospect Terrace (possibly flats?). The Henshall family lived in no.1, James, Fred, Isabella and Joseph? In no. 2 Annie & John Henderson, in no. 3 William Lillie, Annie Scott, in no. 4 Fred Thompson, in no. 5 Henry Taylor Scott and in no. 6 Isabella and William Arkle, and Robert Wright.
There was also a shop, run  by James Rowell Jnr ( he actually lived in Queen St)I remember in the 50s / 60s  Carse and Goodger Solicitors had offices there?

B. White remembers: Carse and Goodgers being there, Johnny Robinson worked there. Johnny was the father of Ian, nicknamed ‘Puggles’.