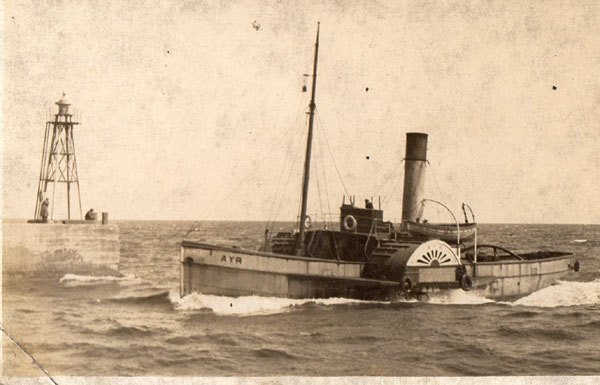 This photo was sent in by Ambler reader Rob Stephenson from Manchester who says he has been a regular visitor to Amble since he was a baby. Rob says “On going through a box of old photographs/postcards I found this one of a tugboat entering the harbourmouth, clearly before the end of the North Pier was coming away.”

No Pride or Respect

Amble seems to be suffering from extreme dog ____ left on streets and in public places. Why do people get dogs and not accept the responsibility of clearing up after them. The pier is smothered with it, the streets, even Queen Street and Church Street; today you would think that it was a dogs’ toilet. Walking the so-called lovely Braid (always a tip to those older residents born here) is one disgusting dog ____ depository. Leslie Drive is, it seems, a target, is it laziness, and it is getting worse than ever. Inability to pick up or just ignorance, they have no pride or respect for Amble or the people that have to try to avoid it. The dunes even the grass on little shore is full of it, animal lovers with no love for their environment or their town.

Pick up, bin it or take it home. I do not want it on my shoes and on my carpets.

Council, where are the dog wardens and why not more fines?

Memories of the ALCAN factory

Re Alcan factory closure. Readers may be interested to know that I used to purchase from them, aluminium ingots to a German specification, for castings which we produced for Ford Motor Co. in Germany. The required amount per week did not all come from ALCAN, but they did supply part of our requirements for many months. The supply was usually put out to tender each month, because prices were so flexible, both up and down each month. This went on for approximately three years until our German bosses decided to start making them in Germany again, because there were signs of a cut-back in orders, and they were going to look after their own. Then, a few years ago, the firm in North Hykeham closed down. The demolition moved in and it is now just a muddy field. All the buildings have gone.
It is really sad to think that in the 1970s, we were shipping over 1000 tons of malleable castings per week, mainly to Massey Ferguson, Vauxhall, SAAB, A.E.C, British Leyland and British Rail (castings used in the laying of a new type of track to hold the rail) plus 150 tons per week of aluminium castings as well.

When clearing out my loft, I have come across a box on which there is a brass plate inscribed thus: 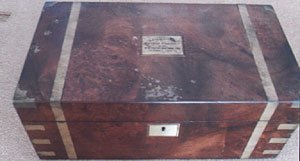 I have no idea how the box came into my possession, I assume that some time in the dim and distant past, my mother may have bought it somewhere just because it looked so nice.

Photographs of the box are enclosed and, as it is well over 100 years old, I thought that any surviving members of a Dawson family may be interested in it and would appreciate any help you may be able to offer in tracking them down.

On Monday 27th Feb, the Friendly Café group that meet at the Trinity Methodist Church were very pleased to be able to give support to Amble Lifeboat by way of a cheque for the sum of £78.88.
The money was raised in the memory of Ella Cook, a founding member of the group, who had recently died. Ella and her husband Stan were very good supporters of Amble Lifeboat, and on the death of Stan some years ago the family gave support to the Lifeboat. Therefore, the group thought that it would be considerate to mark the memory of Ella in this way.

After the presentation the members of The Friendly Café were entertained by a choir from the Edwin Street First School Amble.

Thanks for Helping Dad

My father lives in Amble and is 83 he manages to get around with the help of an electric scooter. On Monday 19th March he was in Amble’s Queen St when he broke down and got very upset. A gentleman who he thinks was called John came to his rescue and brought him home. Not only did he bring him home but got 2 lads to bring the scooter home as well. I would like to say a big thank you to all concerned.