Joan Robinson of Warkworth won first prize in a prestigious national photographic competition organised by the National Arboretum in Staffordshire. 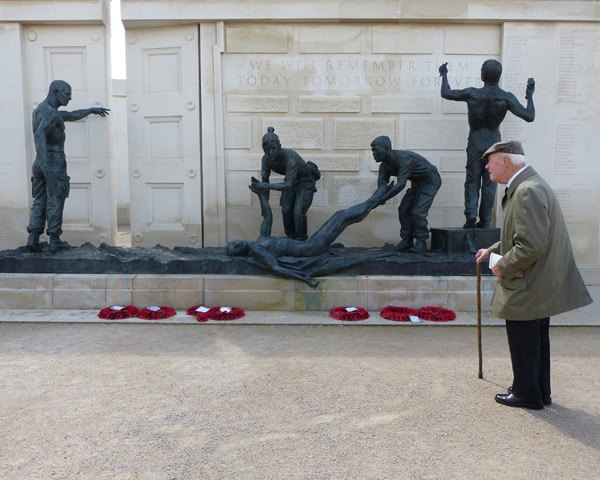 Joan visited the Memorial in May, along with fellow members from Warkworth and Amble District Royal British Legion Branch.

“I’m thrilled to bits” said Joan. “I saw the entry form for the competition while I was visiting the Memorial. I thought that my photo fitted the category and so I sent it off. I was gobsmacked when I heard I’d won. It’s a national competition, so I was really surprised and taken aback.”

Joan who is also a founder member of the Amble Photographic Group, submitted her photo entitled ‘Veteran Remembers’, which depicts Amble and Warkworth British Legion’s Branch President Gordon Charlton lost in thought, shortly after he had placed a wreath at the National Arboretum’s main memorial.

Winners of the National Memorial Arboretum’s annual photographic competition were revealed recently at a special prize giving ceremony which was held in support of the Arboretum, part of The Royal British Legion family of charities.

138 still images and a number of audio-visual presentations entered this year’s competition. All the entrues, along with the prize winning photographs, will be on display in the Arboretum’s Long Gallery until Sunday 25 November 2012.

Launched back in April, the photographic competition encouraged visitors to the Arboretum to capture images relating to the themes of ‘Remembering’ and ‘Nature provides the best monument.’

*This article has been amended. Gordon Charlton is Branch President, not Chairman.