The Old Boat House restaurant: from view to table 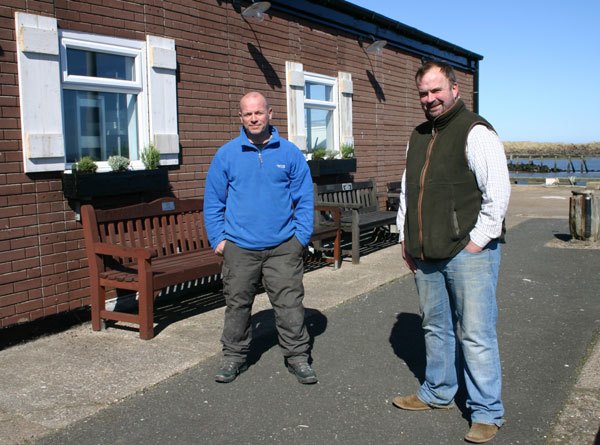 Chefs Martin Charlton and Richard Sim outside their new restaurant. The Old Boat House is situated on Amble Quayside and was once home to Amble RNLI.

A new restaurant on Amble’s Quayside, in the old RNLI building, is aiming to hook both locals and visitors with a combination of freshly caught seafood and locally sourced produce. Top North East chef Richard Sim has joined forces with an award winning festival food team to bring a tasty new venture to the town.

“We’ll be bringing fresh, local produce to our diners” said Richard. “We’ll have a fish buyers licence – that’s the driving force behind the restaurant. Our seafood will be straight off the boats you can see out of the window; you can’t get any fresher than that.”

Richard has joined forces with Martin and Ruth Charlton of The Fire In The Hole, who are renowned for catering to large music festivals and rock bands. “We’ve served the Foo Fighters and the Stone Roses and we were listed in the top ten festival foods at Glastonbury,” said Ruth.

Martin explained the idea behind the new venture: “Working with Richard, we’ll be utilising all our strengths, using local food, wild food, using our wood oven for vegetables, fish and to bake bread. The menu will be mostly seafood, although not entirely, and there will be a Specials menu reflecting local seasonal produce. We’ll be listening to our customers and responding to their feedback too.”

The Old Boathouse will seat 35 inside, 50 outside and in summer will be open all day, seven days a week. You can contact them on 01665 711232 and they also have a Facebook page.

“Amble is one of the few working ports in the North East. It’s a chef’s dream to be working so close to the source of the food” said Martin.

5 thoughts on "The Old Boat House restaurant: from view to table"