Ambler volunteer Vivienne Dalgliesh recounts a recent assignment which ended up being more personal than she expected.

Being a volunteer on ‘The Ambler’ I never quite know what I am going to get involved in. I’ve had the opportunity to meet with Jackie Charlton, Her Majesty the Queen, HRH Prince Charles and most recently Robson Green; I’ve even starred in a film ‘Northern Flame.’ But when I had to go out on a cold wet and windy Saturday, to take photographs, I definitely thought I’d drawn the short straw.

The occasion was the rededication of the Radcliffe War Memorial after restoration, funded by Amble Town Council and the War Memorial Foundation, followed by a ceremony to honour Private Sydney Crackett at the East Cemetery. Should I go? People had been invited so it could not be cancelled, so I wrapped myself against the elements and set off on my bike for the Town Square.

As I arrived someone called out my name, it turned out to be David Crackett. I think I can be forgiven for not recognising him, we probably last met in 1967, he had the advantage of a Facebook image. David and his sister Linda grew up in Central Avenue and I had gone to school with David.

The service at the War Memorial was conducted by Father Malcolm; Mayor Craig Weir said a few words and flowers were laid on behalf of the town, together with some personal tributes. There was a two minute silence and the bugler sounded the last post.

Our next venue was the East Cemetery. Sydney Crackett, David’s uncle, had served with 80TC Company of the Royal Military Police. He lived in Wellwood Street and was married in January 1942, but in April that year he died in a motorbike accident during the course of his duties. He was buried in the East Cemetery, but somehow his memorial was placed in the West Cemetery. Things were put right at this ceremony.

At the graveside Rev. Linda Coulthard conducted a short service and David, as head of the family, said a few words. Among the assembly were representatives of the Town Council, the Royal British Legion and the Military Police. This was a truly international gathering. David Crackett now lives in Italy, Linda Crackett lives in Norway, a cousin Maureen Burton (nee Ormston) had travelled from Wales, and David’s two sons Michele and Tommaso live in Zurich and London.

Representing the still local family was Leslie Tweddle, his grannie was a Crackett. Although international, it was also very small town as we were all related.
Ralph Tweddle, cousin of Syd and one time manager of the Harbour Co-op had planned to attend, but he sadly passed away just before the occasion. His funeral was on 29th October which would have been his 93rd birthday.

After our battle with the elements everyone was invited back to the Radcliffe Club for a much appreciated hot drink. I couldn’t stay long as I had left John with the grandchildren but while I was there I had the opportunity to share some memories and look over some memorabilia. Despite the weather I was really glad I turned up. 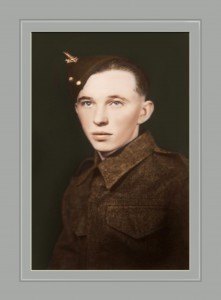 Married 1 Jan 1942. Syd married Caroline Hanslip (known as Carrie) in the Parish Church of Humberston in the county of Lincoln. Syd was 23 and Carrie 17. Since she was from Humberston and his residence is given as Healing, near Grimsby, Carrie returned to her home area and remarried.

Died 7 April 1942. Syd was killed in a motor cycle accident on the road from Market Weighton to Holme on Spalding Moor. He was in a collision with a lorry. His death certificate indicates that he was seriously injured and died in the Base Hospital at Beverley. (We were told as children that he was a despatch rider who was killed on his bike, so we assume he was on duty at the time of the accident).

In civilian life Syd was a shop assistant ironmonger.
His military service on the death certificate he was stationed at Howden, a private in the Corps of Military Police (T.C). TC appears to be Traffic Control.

There  is little information about his life in the military apart from locations gleaned from his postcards home. These place him at Banchory and Balnagask in Aberdeenshire with no indication of when. (Interesting as this is only about 20 miles from where his great grandmother was born, but I doubt if he knew anything about where she came from.)

Syd was raised as Methodist. The family were very strong Methodists (both the Crackett and Turner sides) with a very strong influence from his Grandfather George Murray Turner who ran a greengrocer business on Queen Street. Two of Syd’s uncles became Methodist missionaries and preachers. (George Murray Turner jr who emigrated with his family to America in 1925, and William Robinson Turner who trained at the Methodist College in Richmond, Surrey).