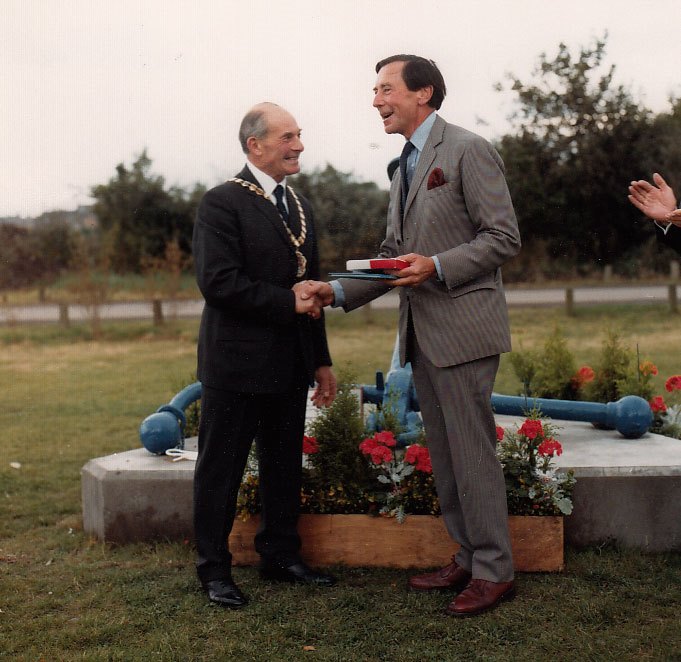 In the last issue of The Ambler (Issue 85 p8, Anchors away) we reported on the moving of the old anchor from the entrance to the Braid, to a new home a few metres away outside the Yacht Club. We asked readers for any information on the anchor itself.
Many thanks to Alderman Bill Mitchell who wrote to tell us that he was responsible for the purchase of the anchor, and to Anne Harper for the  photograph of the opening of the Marina by Lord Vinson of Roddam Dene.
If you have further information, please let us know.

Regarding the moving of the anchor,  I was the chairman of Alnwick D.C. 1984-86, during which time we constructed the Amble Marina.
I was made aware that an anchor was available at premises in Ashington. It was duly purchased and installed at the entrance to the Braid.   In June 1986 it was unveiled by Lord Vinson to mark the opening of the Marina, and to that effect a plaque was attached which I assume still exists. The anchor is in fact the property of Amble Marina.

On  22nd September, 1986,  an official ceremony took place of the unveiling of the Anchor,  when the Chairman of Alnwick District Council, Councillor Hugh Philipson,  invited Lord Vinson of Roddam Dene,  to unveil the Marina symbol prior to the official signing of the lease for the Braid Marina,  by Messrs Camper and Nicholson (Marina) Ltd.