Letters and emails from June/July 2014 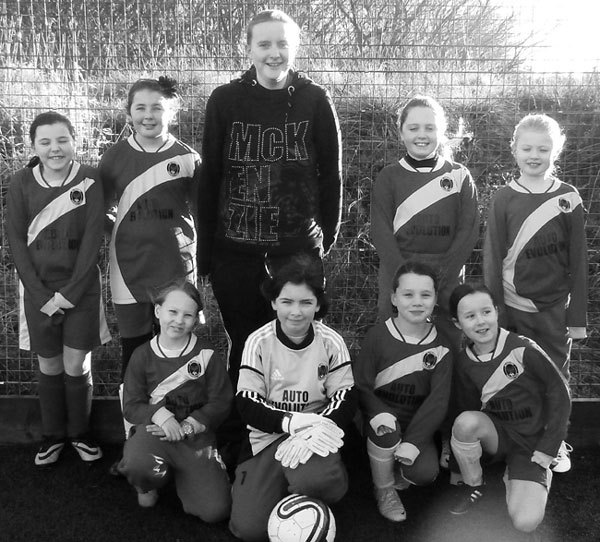 We are looking for girls aged from 8-10 year to come and play football for AE.Phoenix FC.
It doesn’t matter if you have never played before. We are about having fun and keeping fit and every child who would like to play should be allowed to play whatever their ability.
We are based in Ashington and have 14 teams from tots to under 18s. We play in the girls Northumberland football lleague. Our under 10 girls came 3rd and our under 11 girls won the double, winning the league and also winning the league cup!
We are also looking for local companies to sponsor our girls. We do tournaments during the summer around the country, so this would be a great chance for larger companies to get involved.
We have girls from Amble and surrounding areas who play for our club. For any further information and where we practise please contact me
Karen Mitchell
mitchellkaren95@gmail.com 07745058117
or Debbie Todd: debs.todd27@gmail.com

Members of the Amble Lifeboat Crew, fundraisers and their partners recently attended an enjoyable social evening held at the Red Row Brick Club. During the evening a cheque for £1,000, raised at a number of fundraising events held at the club, was presented to members of the crew.
On behalf of everyone associated with Amble Lifeboat Station, I wish to express our sincere thanks and appreciation to everyone at the club who were involved in raising this tremendous amount of money for the station.
As a charity the RNLI relies on support and donations such as this to continue to provide the 24 hour search and rescue service. This generous donation will be put to good use at the station in Amble.
Thank you for the donation and for the warm and friendly welcome we received.
Steve Isaacs  Chairman, Amble Lifeboat Fundraisers

Thank you for wishing me well

I would like to thank all my friends and relations, who sent Get Well cards and flowers, during my stay in hospital. And on my return home. They were very much appreciated.
Warm regards to all.
Joan Shepherd, Bisley Rd,  Amble

I am trying to raise awareness for Alzheimer’s Disease.  My Mam was a sufferer of this debilitating disease, during which my family watched her memories, mind and life disappear before our eyes.  I was about 11 when she was diagnosed and she was 54. She was only 64 when she passed away.  It can affect anyone, at any age, not just the older generation.  I have heard of cases in which people are sufferers in their 20s. Terry Pratchett, world famous author with a magnificent mind, is a sufferer and is leading a campaign to not let this disease be the ‘forgotten’ disease.
I want to raise awareness of this disease and raise funds to help other sufferers and their families.  I know that when my family were going through this tough time the Alzheimer’s Society in our local area were brilliant.  They used to take my Mam out for the day and stimulate her mind by going on day trips or to the centre to make things. This in turn helped us to do everyday things such as shopping which became a struggle as my Mam deteriorated.  I want to help the society to continue this good work by holding charity events to raise vital funds.
Gemma Little  King Edward Street   Amble

Gemma is organising a sponsored walk from Craster to Amble on Saturday 2 August 2014. For more information go to www.facebook.com/xsavethememoriesx There will also be a Charity Night in Amble Bede Street Club on Saturday 4 October with entertainment from local band  ‘The Britpop Union’  in memory of Anne Little (1942 -2006) 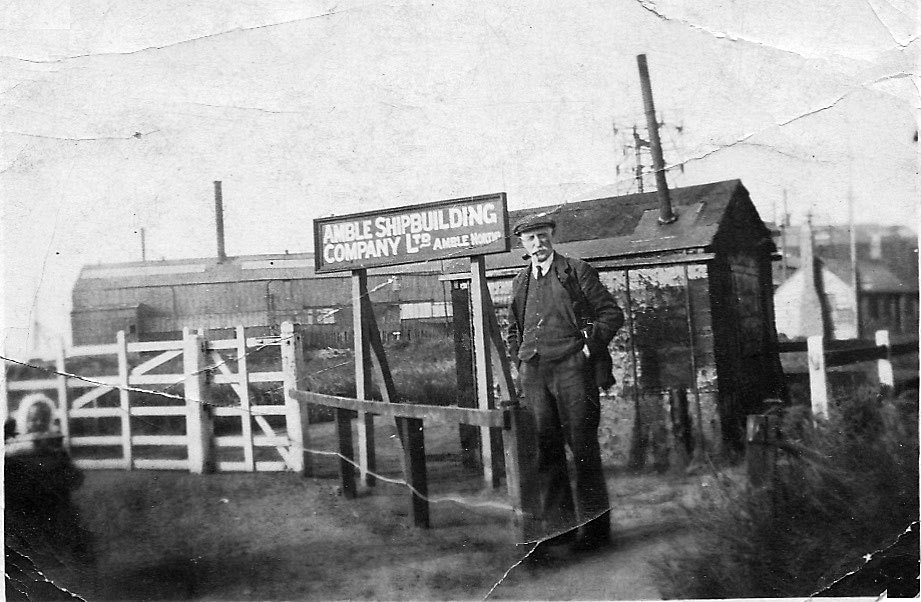 The last edition of the Ambler gave an account of the progress of the Amble Yacht Club and also Bill Mitchell’s anchor.
This prompted me to seek out this old photograph taken about 1930. It shows my grandfather, John George Rogerson, who on retiring from the Northumberland Police Force was engaged as a night-watchman.
The photograph background shows the size of the shipyard buildings which we think were demolished in the mid thirties.
George Young, Woodbine St,  Amble

Just to make all dog owners aware of the very real dangers of their pets eating seaweed!
I have three Gordon Setters, the two older ones have always enjoyed the odd nibble of seaweed and the new puppy, 4 month old Fingal decided to join in.  12 hours later the poor pup was in a sorry state having totally bunged himself up.  The main danger is when the stuff is dry on the beach, as once eaten it will swell inside the gut and can cause a fatal blockage.
Thanks to the marvellous attention of Paul Freeman at Alnorthumbria vets, Fingal had a life saving operation in the early hours of Monday morning and it now right as rain.  Hopefully he won’t be doing that again!