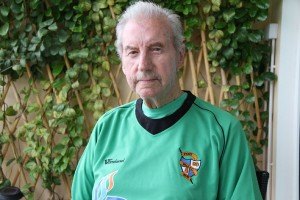 Ray King’s goalkeeping career lasted 11 years. He began playing for Newcastle United, but spent most of his career at Port Vale, helping them reach the FA Cup semi finals in the 1953-1954 season. In 1954 he played for the England B team against Switzerland.

It is with tremendous sadness that I have to tell you and all the Ambler community that my dad, Ray King, passed away yesterday afternoon, 19th July.

He was one month shy of his 90th birthday. He was the kindest and most gentle of men and a remarkable husband and father. Since my mother Norma passed almost 5 years ago my dad, as you know, has been living with me here in Bangkok.

Fortunately I have been able to provide him with a very comfortable life and I know that he has been so happy here. He has continued to write regularly for the Bangkok Post, sharing his prodigious knowledge of football, especially the game of the 40s, 50s and 60s and also commenting on the game of today. In his last letter to the Bangkok Post he predicted that Germany would win the World Cup in Brazil.

His phenomenal memory never ceased to amaze me as he would reel off the names of all the players, the positions they played in  and provide a mini-biography of those hundreds, if not thousands, of footballers he played with and against.

My dad was one of those rare individuals who was at the very least good at any sport that involved playing with a ball. He was a good tennis player, a respectable golfer, a very good snooker player, an excellent table tennis player, a superb cricketer and of course his genius as a goalkeeper needs no superlatives.

I know that many of the Ambler readers will miss the Ray King column in which he wrote about his life, others’ lives and often just shared some words of wisdom from his vast experience.

He always enjoyed reading the Ambler as it gave him some contact with the town that was his home for so many years and he was always especially grateful to the readers who would write to him. He would so often tell me about his life as a young child at the Low Hall, then Radcliffe and subsequently Lindisfarne Road in Amble.

He always wondered why he was clueless at maths whereas his son became a mathematician. I was never much of a footballer and couldn’t even get in the school team whereas my dad was playing for Newcastle United in front of more than 60,000 fans at St. James’ Park when he was just seventeen!

I love you dad!