Watch out for seals 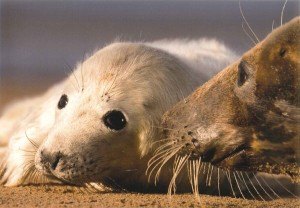 Now that the first seal pups have started making an appearance along the North East coast, Northumberland Wildlife Trust is encouraging members of the public to be vigilant.

At just a few weeks old, the young pups head off to sea to prepare to live an independent life.However some will turn up on beaches along the coastline as they learn to swim and feed.

If you spot any young seals basking on the coastline on their own, do not panic. Just leave them alone. Their mother is probably close. Dog owners are asked to ensure that their animals are kept away from young seals.

Northumberland Wildlife Trust is also asking for help to monitor the number of dead seals. There is an apparent rise in numbers of deaths and the trust is working with other organisations to investigate the cause of seal deaths along the coast.

Some are shot, some are diseased and some are thought to die as a result of injuries caused by contact with ship propellers.

If anybody finds a dead seal, please contact Aurelie Bohan, Northumberland Wildlife Trust Living Seas Officer on: 0191 284 6884 or email her at Aurelie.bohan@northwt.org.uk with details of the exact location and, if possible, a digital photo. This will help establish the cause of death. Although post-mortem is more accurate, this method will be valuable and is cost effective in monitoring the issue.

Random reports of dead seals are helpful but we hope an increase in reporting rates will help to establish reasons for deaths.
Northumberland has an important breeding population of these animals. The county therefore has a role to play in conserving this species and it’s important that we know what is affecting that in both positive and negative ways.

3 thoughts on "Watch out for seals"