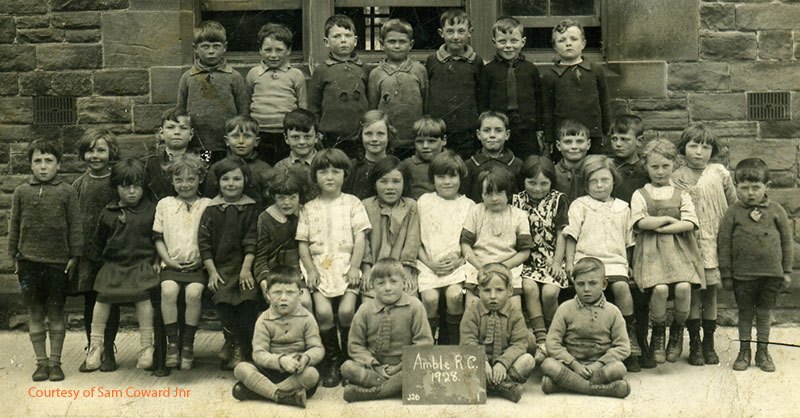 Amble RC schoolchildren 1928. Sam Coward is third from left top row (with holes in his jumper).

My father Sam Coward was an Amble man, my early childhood memories are populated with summer holidays spent in the town visiting my grandmother and uncles, John, Joe and George.

Days were spent fishing from the pier, walking home along the harbour where real fishermen unloaded boxes of fresh salmon caught off the Coquet. When we weren’t fishing it was picnic lunch with my granny on the links beach, where I climbed the dunes and scoured rock pools for crabs. 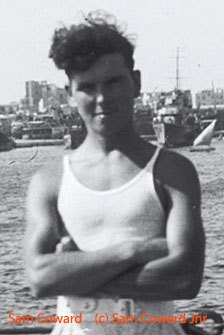 Sam Coward on board HMS Arethusa

My father served in the Royal Navy during the war, but somehow we never got around to discussing those years. He had an interesting post war career, designing and installing catapults on carriers.

In retirement he enjoyed a passion for gardening and rode his Rudge motorcycle the length and breadth of Britain attending rallies and visiting friends. He embraced technology, viewing computers simply as the world moving forward, though spam exasperated him.

One day in 2006 while clearing junk from his hard drive, I came across a folder entitled ‘Sam’s diary 1942’. Though not in the habit of reading his personal mail, on this occasion curiosity got the better of me.

The diary detailed his daily life onboard HMS Arethusa , sailing from Greenock in May 1942 down the west coast of Africa to Johannesburg, around Cape Horn, then up the east coast through the Suez canal into the Mediterranean.

On the 18th November, while escorting a convoy to Malta, Arethusa was torpedoed. 156 crewmen perished in the initial explosion, which should have sunk her, but after an epic three day voyage she made port in Alexandria, where dry dock exposed a hole in her hull the size of a bus. 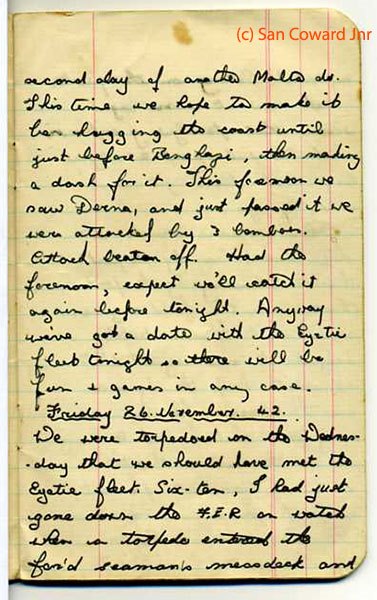 A page from Sam’s diary

Aware that I was reading a copy of an existing diary and not the recollections of an old man, I sought out my father and asked him about it. His response was: ‘so you’ve found that have you’, then told me where in his desk I would find his original diary. A few minutes later he was recounting the events as if it were yesterday, as I thumbed the pages he had written 64 years previously.

He mentioned taking ‘snaps ‘, (photographs), I enquired as to their possible whereabouts and was sent back to his desk where I found an envelope containing a packet of negatives.

Torpedo strike
The Arethusa web page www.hms-arethusa.co.uk documents the voyage, the torpedo attack and the aftermath, providing a detailed account from the Naval perspective, which complemented my father’s hand written account of the time.

Friday 26th November 42 ‘sitting on the quarterdeck now it seems it ages since that paralysing explosion and the subsequent 25 deg list       yet it is only nine days’.

He was standing by the port throttle when the torpedo struck. Orders from the bridge were to maintain full speed, but he instinctively seized the throttle and reduced speed, aware that if he didn’t, the ship would have gone to the bottom.

After handing over the engine to his shipmate he made his way up on deck, where he found the sea coming over the gunwale. He clung to the guard rail, then climbed down into the aft engine room, his ‘action station’.

There he found the port side ring main dead (electrical power). He spent the next twelve hours rigging up emergency leads to fire and ballast pumps, extractor fans etc.

Later he writes, ‘a huge fire had threatened to engulf the ship, but ‘great things had been done, men worked hard, brought it under control and finally it was extinguished’. 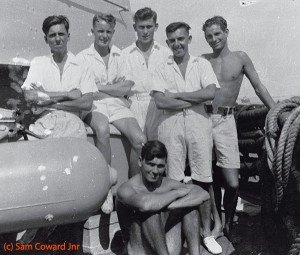 Impressive actions
Over the next few months I put together a book, scanned pages of his diary accompanied by ‘snaps’, in which my father managed to name most of his shipmates.

The more I wrote the more his actions impressed me. Reducing the throttle was in direct conflict to the orders given and he was only 22 at the time. I asked him about rigging up emergency leads, only to be told, ‘it was nothing’ and that, ’everyone had been shown how to do so.’ I imagined climbing into the bowels of a ship that appeared to be sinking and connecting up emergency power supplies.

My father passed away peacefully at home in 2007. Sometime after, as you do, I found myself scrolling though the Arethusa site, reading comments, when I recognised a name: Ted Mullin. I had a photo of him with my father, so wrote an email introducing myself. The following day I eagerly opened his reply, well aware that he must be around 90.

Ted survived the torpedo, but lost all of his possessions. I sent him photos of his shipmates and told him about my life in France, he in turn told me about his, as a retired headmaster living in Canada.

I sent him my father’s, ‘crossing the line certificate’, which he subsequently photo- shopped his name onto. ‘For my grand children,’ he wrote.

On his retirement, at the insistence of Iris his wife, he had written his account of the attack, entitled ‘Three Fateful Days’.

Ted wrote in detail, his story ran to 20 pages, one of which contained this line: ‘Although the port side was impassable due to buckled steel plates and debris, the fire main, miraculously, was intact, because full water pressure was available as soon as the hydrant was turned on’.

I read the line several times, reflecting that great things had indeed been done by Ted and his shipmates, but my thoughts went down below decks to my Dad.

10 thoughts on "Sam Coward: Diary of a WW2 sailor"