A retired Amble man has written the intriguing story of how a miner from Radcliffe became embroiled in a secret intelligence mission during WW2. 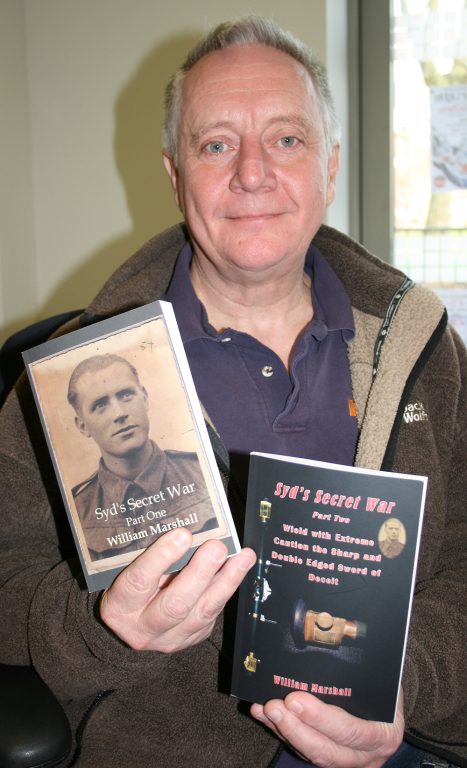 Bill Marshall with the two books of Syd’s Secret War

For decades, the ex Northumbrian Fusilier rarely spoke of his war years. Towards the end of his life however, he began to tell close friends and family some of his remarkable experiences. Bill Marshall was one of those trusted friends, and listened to his stories in their local pub in Amble.

Bill told The Ambler: “Syd always felt bound by his military oath of secrecy and never divulged the story throughout his entire life, and only started talking about his experience after watching a television program suggesting WW2 oaths of secrecy were spent, and it was now time to tell. I promised Syd on his deathbed that I’d write his story, but he did ask that I write it as a novel and keep his real identity undisclosed.”

Bill has now written two novels based on Syd’s real-life experiences. In them, he details the extraordinary story of how he was initially called up to fight with the British Expeditionary Force at the Battle of France, then, as a prisoner of war, he was detailed to assist in the Officers’ POW camp. It was here it was noticed he bore a striking resemblance to one of the high ranking officers.

And then began Syd’s ‘secret war’, which involved an identity swap and a complex intelligence operation to infiltrate a plan by the Third Reich to recruit Allied soldiers to fight against the Russians.

The operation yielded considerably more than those who conceived the plan could have ever hoped for, ultimately enabling a spy to infiltrate the highest levels of German command.

Bill said “I have recently retired from a career at sea, and it is only now that I have had the time to fully write and give the story the accolade it deserves.”

One thought on "Syd’s Secret War"