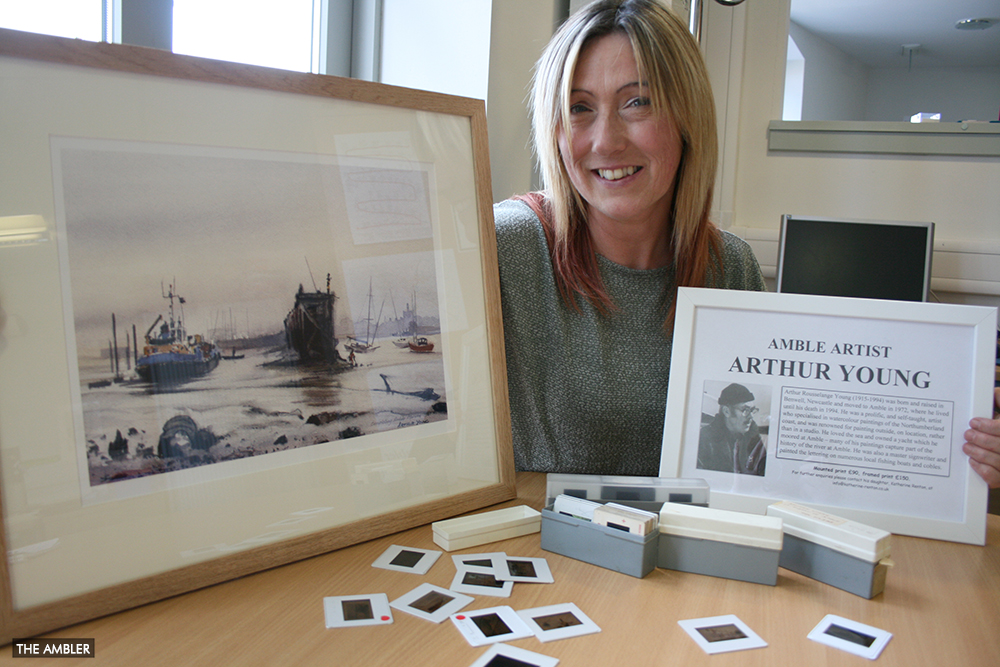 Katherine Renton discovered her father’s old slides in the attic

For local art lovers of a certain age, the name Arthur Young will bring back many memories of a prolific painter, local character and passionate friend of the Friendliest Port.

And now a discovery has been made which will enable a new generation of people to get to know the work of one of Amble’s most popular painters, and revisit scenes which have changed dramatically over the intervening years.

Arthur Young was a successful commercial artist before moving to Amble in 1972. Born in the heart of Benwell in 1915, Arthur attended evening classes in art as a teenager, and eventually set up his own screen-printing business in Newcastle, which went so well it enabled him to retire comfortably. Arthur moved to Albert Street, opposite the Blue Bell pub, with his family and developed a great love for this area of the coastline. He kept a yacht on the river which enabled him to sail the length of the Northumberland coast, and he quickly established himself as a local artist who specialised in watercolours.

His daughter Katherine remembers her father with fondness and a great deal of pride. “He had a passion for life,” she said, “and he was always happy for us to accompany him on his many adventures on the boat, and on his endless painting trips.”

She remembered an interesting childhood with her two brothers and her mother Eleanor, also a talented professional artist and picture framer.

“The house was full of interesting objects, brought back from our days out and our holidays on the boat, and growing up with two artists meant that art materials were always readily available.”

He was renowned for always painting outside, at the scene of his subjects, and within two or three hours would capture the light and colour of the Northumbrian coastline in every painting.

“He had a natural talent and painting was something that he just had to do,” remembered Katherine with a smile. “He particularly enjoyed painting scenes of Amble, but would also paint views of Bamburgh, Holy Island and anywhere else that caught his eye.” 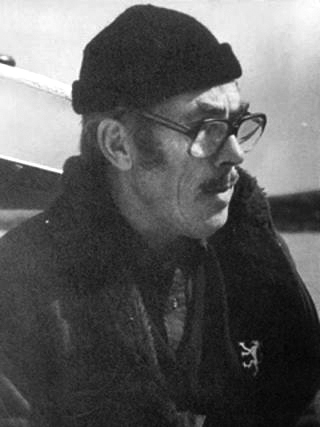 Arthur Young was one of Amble’s most popular landscape painters

After his death in 1994 aged 78, the family gathered up his possessions, and gradually moved on with their lives. Eleanor continued to paint, Katherine followed in her parents’ footsteps and became a successful artist and art teacher, Peter is now a Professor of Solar Physics in America, working for NASA, while younger brother Brian became an engineer. And the family would often be asked about Arthur’s paintings and how people might buy his work.

“I tell people they have to look in auctions,” said Katherine, “because the originals do still come up from time to time. Sadly, we don’t have many of his works at all. But three months ago I was in the attic and I discovered a large number of old slides. I held the first one up to the light and realised it was an image of one of my Dad’s paintings, with the title ‘Completing Amble Marina 1987’.

“A dredger is pictured between the pontoons and the West Jetty, and no yachts can be seen in the marina. Looking through the slides really brought home the love he had for Amble and the coast, and I realised that they now serve to show part of the history of Amble Harbour.”

Katherine has had some of the slides made into high quality giclée prints, and is looking for spaces to exhibit them. The prints depict Amble and the nearby coastline, and were mostly painted in the 1970s and 80s.

The first exhibition is taking place this summer in the Cock and Bull micropub in Amble Town Square. After that, she hopes to display some in the Old Boat House and in other venues.

The prints will be for sale at these venues, and you can contact Katherine directly via email: info@katherine-renton.co.uk