Anger at authorities over flooding at Riverside Park

Residents of Riverside Park have expressed their anger and frustration with Northumbrian Water and Northumberland County Council (NCC), claiming that they are being left to clean up while no-one will take responsibility for the poor drainage infrastructure, which leaves the area prone to flooding. 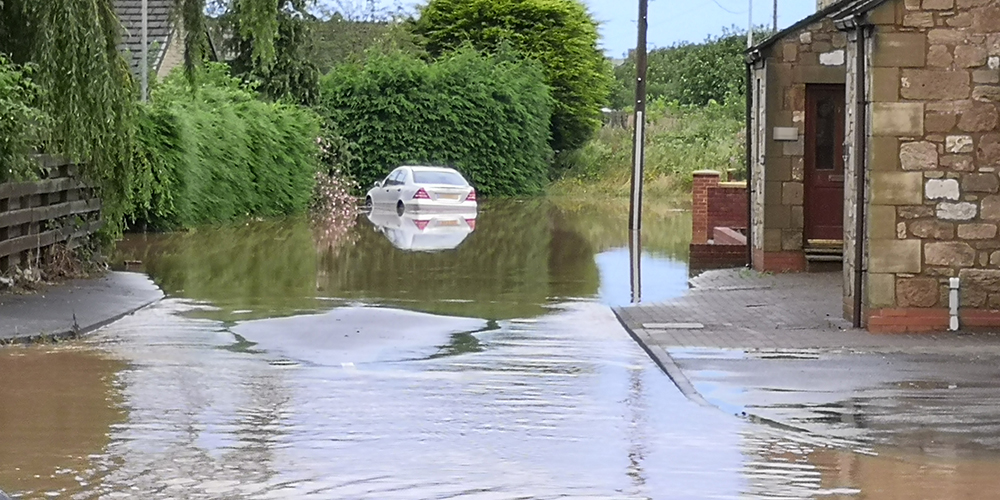 During the torrential rains over the weekend of 9 – 11 August, water poured down from Gloster Hill, bursting out of the drains, and leaving the A1068 at the bottom of the Wynd flooded, and parts of Riverside Park knee deep in water.
Once the water levels subsided, Northumbrian Water (NWL) sent a team to hose down the road and disinfect the contaminated area. 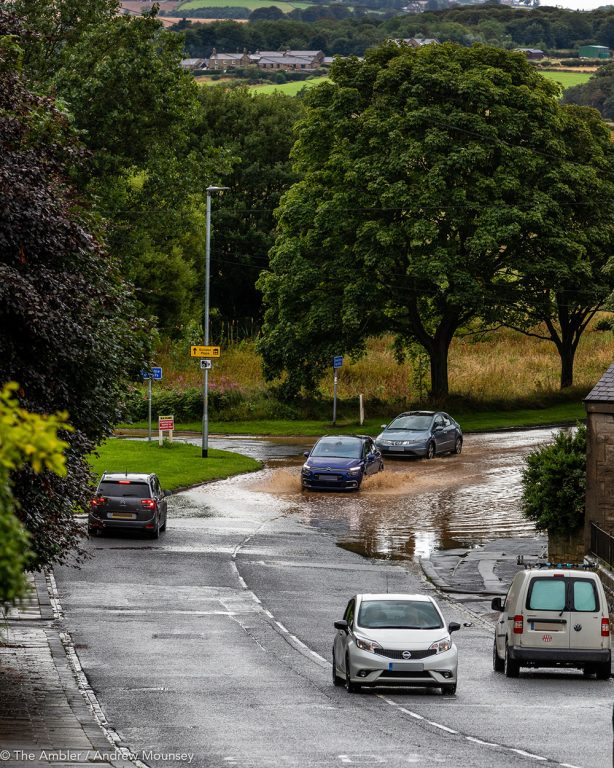 The A1068 at the bottom of the Wynd also flooded. Photo by Andrew Mounsey

Residents of both Mariners View and Riverside Park claim that the authorities refuse to do anything to alleviate the issue.
“I’ve lived here for ten years and this is the worst I’ve seen,” said Mark Phillips, who lives in Riverside Park.

“The flood water was probably a foot deep at my doorstep, past the air bricks and higher than the damp proof course. It flooded my garage and now I’m clearing up, I don’t know whether it’s contaminated with sewage.

“I talked to Northumbrian Water who said it is nothing to do with them. I contacted Northumberland County Council and they said they didn’t know who I should talk to. They did come out and sweep the street.”

Mark was angry and said he felt let down by both NWL and NCC. “We should have a team down here telling us what’s what. Is my garden contaminated or not?

“It’s got to the stage I think I don’t know if I want to live here anymore. Flooding in this part of Amble has been a recognised problem for decades, and residents are frustrated that nothing is being done, yet more house building is going ahead.” 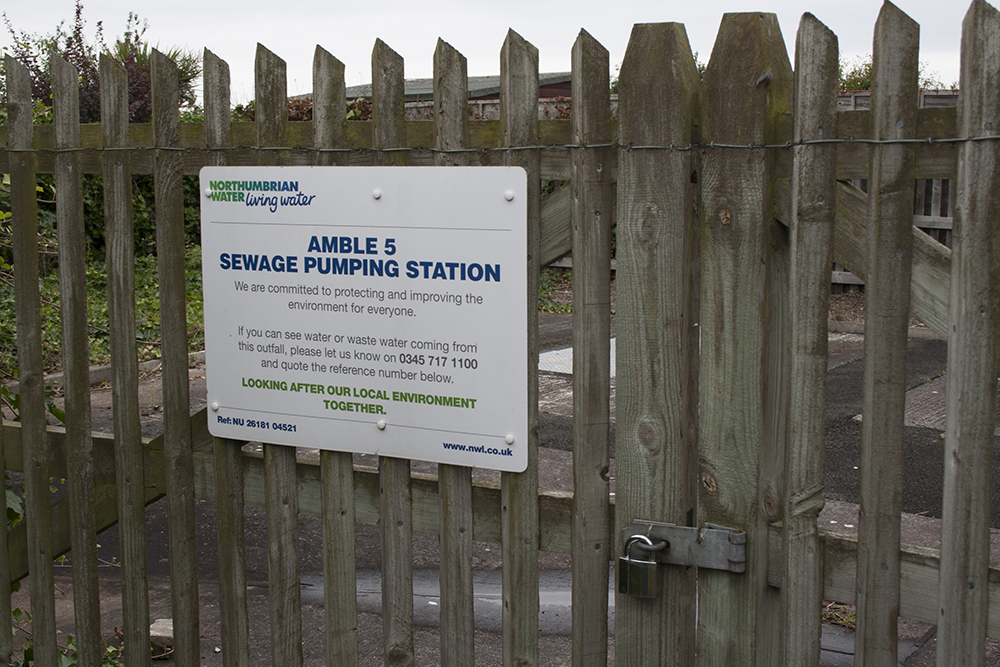 In 2011 NWL considered upgrading the drainage system in Riverside Park, but has yet to take the plans forward.

Accepting responsibility
Eight years ago, NWL accepted that the drainage system in Riverside Park wasn’t good enough to cope with high intensity rainfall events, and that the system gets further overloaded due to the addition of water from Gloster Hill.

In the report, the more expensive option was deemed too costly. The second version was seemingly never taken forward.

Ongoing development
Concern has been expressed about the impact that 42 new houses currently being built at the top of Gloster Hill will have, once they are connected to the same drainage system.

Conditions were put in place by planners to mitigate flooding further down the hill, but they have not yet been constructed.
County Councillor Jeff Watson told The Ambler: “It is really worrying that this sewage problem has come back again.

Northumbrian Water has assured councillors that the system could cope with the proposed development of new houses on Gloster Hill. I will continue to press for work to be done by Northumbrian Water to rectify the problems.” 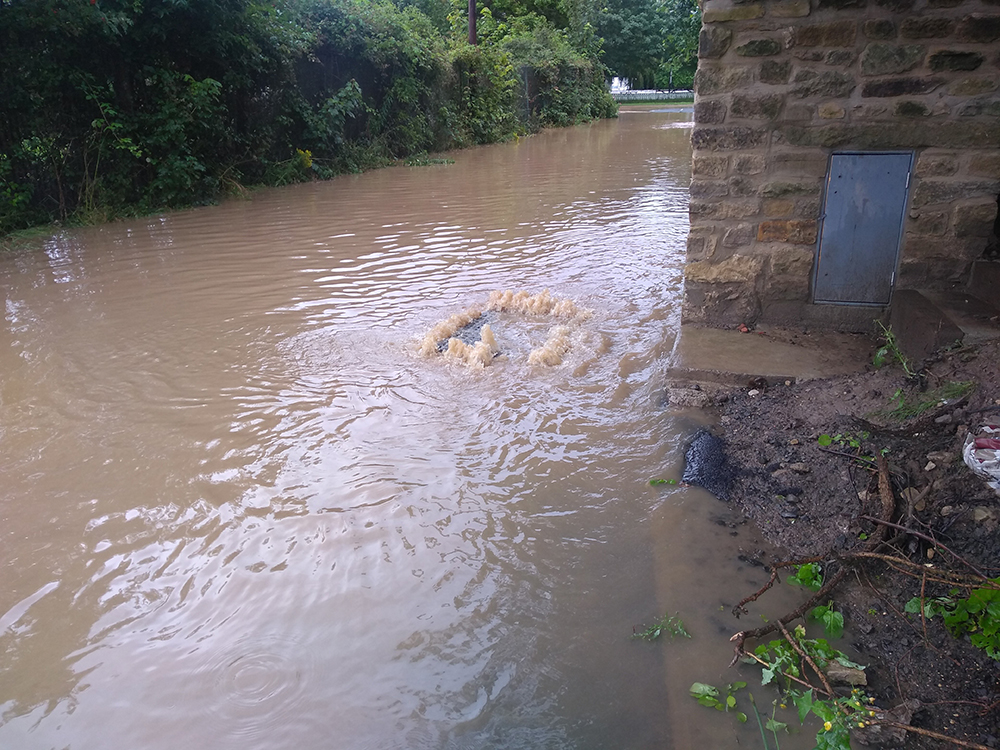 Overflowing drain at the bottom of Gloster Hill

New sewer for Gloster Hill
In a statement to The Ambler at the end of August, NWL announced they will install a new sewer for the new Gloster Hill properties some time in the future, in order to lessen the volume using the Riverside Park system. They did not comment on why the 2011 Riverside Park upgrade had not taken place.

A spokesperson for NWL said “We are aware of the flooding issues in the Gloster Hill and Riverside Park area of Amble that occurred earlier this month. We have attended the site and carried out investigations into the cause of the flooding, which we understand was caused by extremes of weather and overland flow. We understand how distressing this can be for local residents, and we are monitoring the situation closely.”
Anna Williams

One thought on "Anger at authorities over flooding at Riverside Park"