A determined teenager has reunited a distressed lady with her lost bag, after seeing posters for the missing item. Thirteen year-old Alex Taylor who is staying with his grandparents in Low Hauxley saw a poster for the lost backpack on Friday evening 15 May, while out for a walk.

Grandmother Diane Taylor told The Ambler: “Alex and I went for a walk at around 10pm, we went down to the beach near the chalets. We saw a poster stating a small ladies back pack had been lost on the beach that day. I said to Alex, ‘there’s no way we could find this in the dark, and the tide would probably have taken it out by now.’ But Alex was determined to find it, and took a torch and went off to hunt. Then, lower down the beach, tucked well behind the rocks, he found the missing bag.” 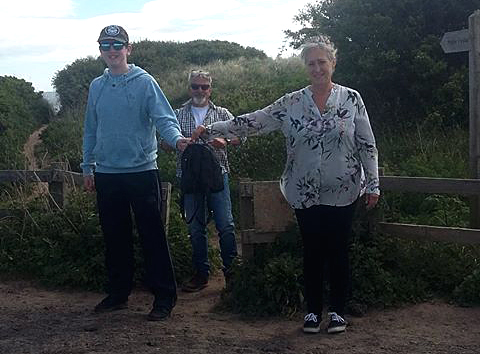 Alex said, “I wanted to help after seeing the notice, because I knew how upset someone would be losing their bag. I was surprised when I found it as it was well hidden behind the rocks. I looked forward to letting the owner know it had been found.”

Hauxley resident Nigel King who made the posters, contacted the lady, who returned the following day to reclaim her bag.

Deborah Ward from Ponteland told the Ambler she was delighted when she heard her bag had been found. “I had been to Hauxley beach with Bodi my 2 year-old grandson. I got back home and realised I’d left it. I thought it was lost or stolen, and I was devastated. When I heard it had been found I was delighted. I couldn’t believe the community spirit of someone putting out a lost poster and then it being found. I want to say a massive thanks to Alex. If he is the future of our country, I have the highest hopes for moral integrity.”