As we described earlier, the roll out of the Covid vaccinations at Amble Health Centre has been remarkable. Thousands of Amble residents have been given their first Covid-19 vaccine in the first weeks of 2021. The centre also acted as a hub for patients from Warkworth, Hadston, Broomhill, Widdrington and Felton. Staff at Coquet Medical Group worked tirelessly, but they were helped in no small measure by a team of volunteers. We spoke to one volunteer, who described the process: 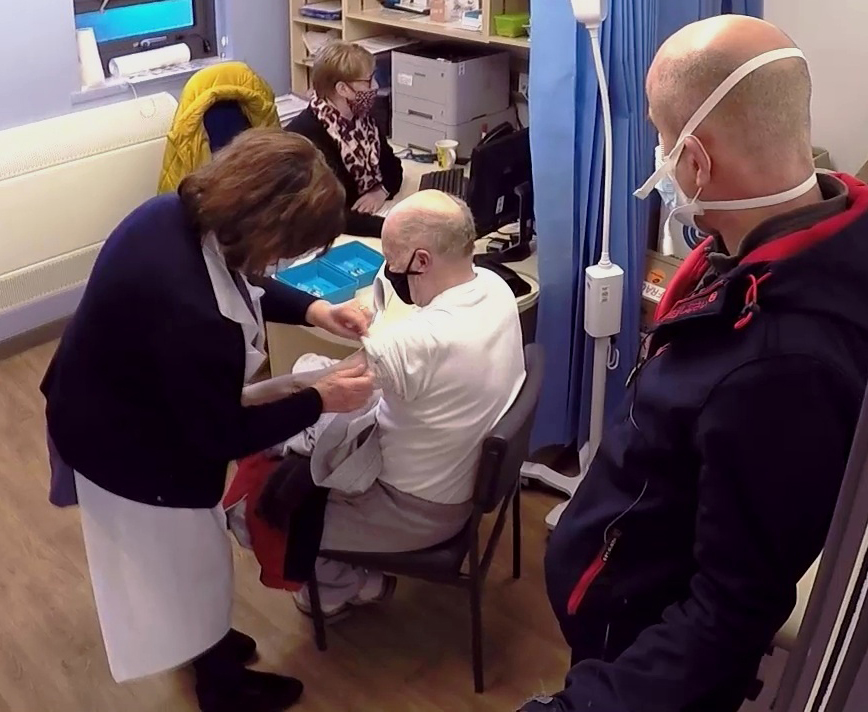 Above: one of the first patients to receive their Covid vaccination at Amble Health Centre. Photo: Coquet Medical Group

“The volunteers were largely from the Isolation Support Group, plus two Well-Being practitioners.

Our tasks included meeting and greeting at the door, handing out leaflets, and fielding other enquiries and appointments. Then someone else took their temperature before they entered and asked if they’d had any symptoms. The Well-Being people logged them in on the computer. Then they sat in the waiting room.

Someone else sent them down the corridor and they went for their vaccination in one of eight clinics. The back doors were manned by volunteers, and they gave out a sticker with a time on saying when they could leave.

They were directed to a huge tepee in the car park, and sat for 15 mins to check no adverse reactions (this is only for the Pfizer vaccine. They won’t have to do it with the Oxford one).

A couple of volunteers supervised the tent, plus a medic. Then they were directed back through the car park. There were also marshalls in the car park helping people park as they arrived.

It was an incredibly well organised operation and they did 500+ vaccinations each of the four days.

It was an amazing achievement by all involved, and the nurses worked so hard. Plus the patients were so positive and grateful that they were getting the vaccination.

There was a lovely atmosphere at the Health Centre. It was an honour to be part of this operation!”
Lynne Morelli 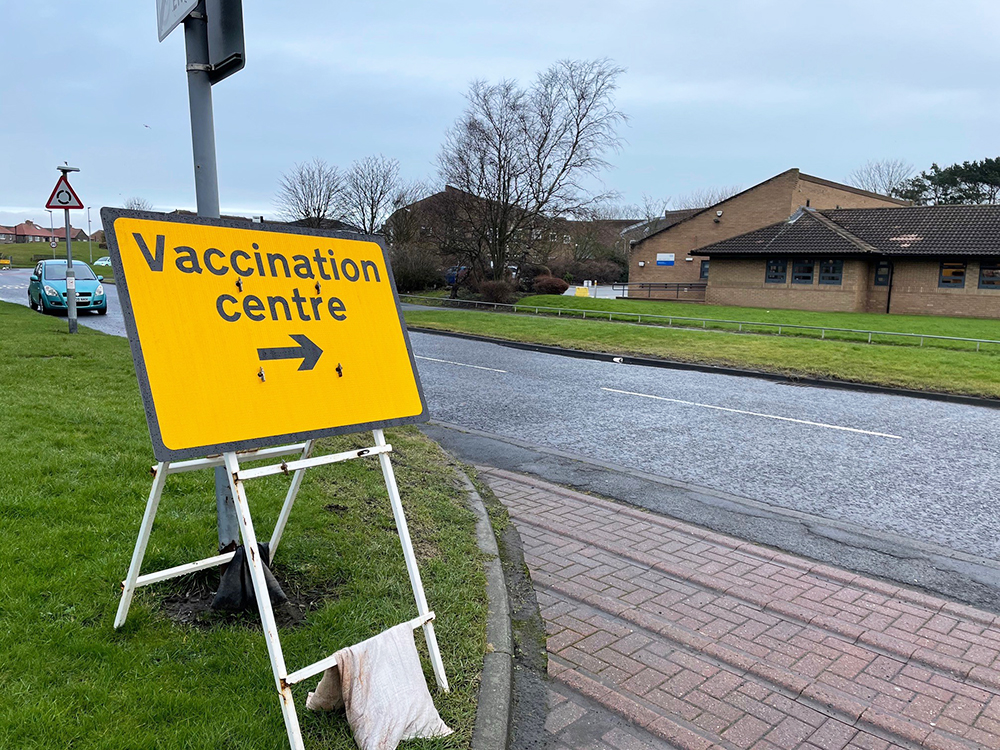 I was very excited at the news that vaccines against the Covid19 virus were being produced. I was not only excited, but filled with hope, particularly when at least two of them were approved for use.

I did expect that the 30 – 50 age group would be first to be vaccinated, as it’s they who are usually looking after and supporting the younger and older members of the community. However, I did not refuse my first appointment on December 30 and turned up with my husband, Ian, at the Amble Health Centre at the appointed time, having easily walked there. At least I walked and Ian travelled in his electric scooter.

The whole experience was amazing. A large number of over-80s, with varying difficulties, being led through temperature-taking, given instructions, being registered, sat down, made to wait no more than a few minutes, then guided to the surgery where the jab in the arm was given.

We weren’t abandoned then but led to the heated tent, sat down, given quarter of an hour and told we could go. And all of this was done with patience and kindness from the volunteers, who constantly gave help and answered questions. Rather than “Hurry along there please”, we were more likely to hear, “Be careful. Take your time.” The whole process had been well considered and highly organised. From our perspective, it worked like clockwork.

I’ve spoken to others who have been vaccinated and all agree it was like a military manoeuvre, but carried out in a caring way. One friend had not quite such a good experience the day before mine. Unfortunately, that was a cold wet day and the heater in the tent had broken down! Not something that could be foreseen but obviously sorted out.

Ian and I have been informed that our second jab has been postponed to a date sometime in the next twelve weeks, a message we expected to get. 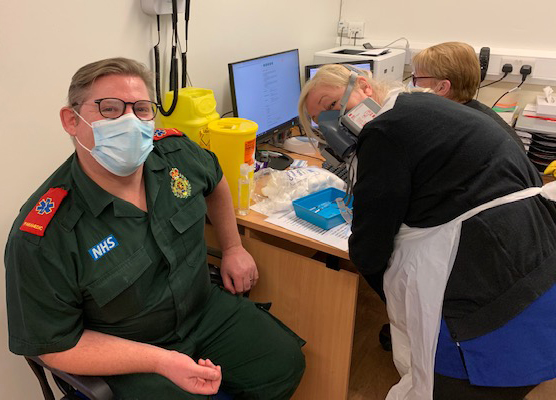 NHS frontline staff were also some of the first to receive the Covid vaccination. Photo: Coquet Medical Group

“I’m sure your post box will be full of letters/tweets/e-mails etc praising Amble’s health centre during the current Covid-19 vaccination campaign. It was so quick off the mark to get the ball rolling, and the efficiency with which the jabbing process has been undertaken is nothing short of brilliant. Huge congratulations to all the staff/volunteers for their excellent work.”
Colin and Pru Heathcote, Grateful recipients.

One thought on "Amble jab experience ‘nothing short of brilliant’"