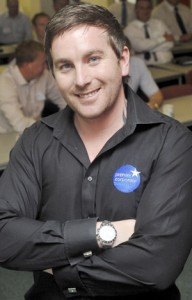 Well I have just seen Santa getting ready for Christmas and he is going around in his shorts and flip flops, putting sun cream on all the reindeers noses (that’s the Australian Santa by the way as it’s their summer at this time of year!).
It will be different this year for me as my Dad passed away in October after a battle with bone cancer. My Dad, whenever I came to him with an idea, always said the same simple thing ” Well, go and do it then”. Now I am not sure if he meant to but, what he did was made me aware that lots of us actually say  ”I have an idea!” but very few of us actually do anything else than have the idea, there’s no action that follows and it dwindles away. He was the same when I thought about starting my company up ”Well, go and do it then!”
Did you know that Premier Corporate Training is the actual best training company in Northumberland? Allow me to just bask in the glory for a little while……..lovely! We won first place in the Northumberland business awards (training category) against companies who have many thousands of employees and their turnover is in the multimillion pounds bracket. How did we achieve this? Simple, because I absolutely rock in every aspect, I am simply the man, no doubt about it! I don’t even know how I got this good, it shocks even myself!
Seriously though, all joking aside, it really is such an achievement to win this award against some large and respected names, much bigger than my own company. We won the award on what we actually do, not what we say we are going to do. The reason why we won is that the large blue chip companies I work with all appreciate my approach of finding the problem, identifying what needs to be done and when they say they are ready to fix it they get my dad’s response of ‘Well, let’s go and do it then!”
Many thanks for all the nice comments about the lovely big pink Silvercross pram that you may have seen going about Amble. It took me a while to swallow my male pride but I’m used to it now and yes,  ALL you women are correct, pink is for a princess and blue is for a boy. If it’s a girl it has to be pink doesn’t it! So for all you other dads out there pushing pink prams… I understand you!!
Puzzle answer is you need to put the 2 halfs of lager together. Put two halfs together, you have a hole. You have a hole, you can get out the box.