One to watch: Danny Gray 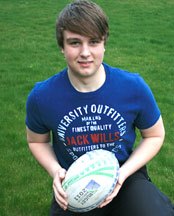 You might meet quiet, mild mannered Danny Gray and have no idea that he transforms into a raging rugby star during his spare time. But for those in the know – his school sports coach, the Under 15s Northern Club coach and Northumberland County RFU – the talent of this unassuming teenager is unquestioned.

“Danny is a fantastic rugby player” said Tony Appleton, head coach of Northern RFU under 15s. “I rate him very highly. He’s one of the best rugby players in the County – in the region even – in his age group. He really has an exceptional talent. He’s a gentle giant, but once he gets the ball on a rugby field, he’ll always break the line. He’s got the potential to go a long way. He’s a great lad.”

Danny plays for his school, Newcastle School for Boys, where he is captain of the Under 15s team, for his club, Northern RFC and now he has been selected to play for the county, Northumberland County RFU, where he took the first try for his Under 15s team in his very first match.

“I tried rugby at school when I was in Year 4 and found I was very good, and I ended up on the team” said Danny. And since then he has won a series of awards. In 2009 he won Northern RFU Player’s Player of the year and Newcastle School for Boys’ Rugby player of the year, and in 2010 he won a three year sports scholarship at NSB. 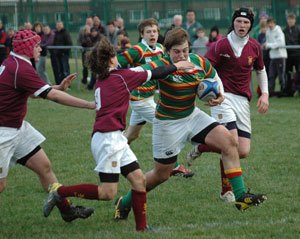 Sports teacher, Lee Hogarth, told The Ambler: “I have been Dan’s rugby teacher for five seasons now and in the time he has made superb progress. He is an outstanding player with exceptional power and a good tactical appreciation of the game.

“However, as with most great players, it is his mental strength that sets him apart. Dan has the perfect attitude for any sportsman; he is willing to give his all in training or in matches, is enthusiastic about improving and is respectful in victory or defeat. He captains the school rugby team with a quiet determination that commands respect from team mates and opponents.”

Danny understands the difficulties of progressing in sport from amateur player to professional sportsman, but his dream is to play at the very top. He told The Ambler, “I take sport very seriously – I’d like to go as far as I can”

Training for rugby takes up a great deal of the teenager’s time. Twice a week, he trains early in the morning before school even starts, and at weekends when necessary. And of course there are the matches and tours which also take place at weekends. Danny is also keen on athletics, particularly shot and relay and he plays cricket for his school and for Kirkley Cricket Club during the summer.

But rugby is his favourite, and with hard work and good luck Danny has the potential to do well. “I just enjoy the game, but it would be my dream to one day wear the England shirt and play for my country”