Clearing up after the storm 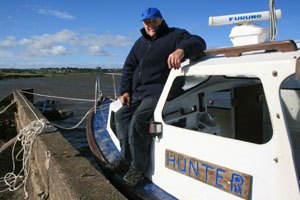 The floods of 25 September, which devastated Rothbury and Morpeth, also caused misery at the mouth of the River Coquet with flooding in Warkworth and damage to boats in Amble Boat Club. Alec Miller watched as a huge tree struck his boat ‘Hunter’, causing it to sink.

“I was there watching; the tree went on the front mooring and forced the front end down.”

Four days later he was able to raise the boat and survey the damage. “The windows are out, the back end has been ripped off, the engine’s knackered and all the electrics are gone.”

I paid £8,000 for it back in June. But I’m fully insured and the insurance man is coming out to give me an estimate.”

There was a 40ft tree we managed to catch and slow down” said fellow Amble Boat Club member Sam Farrington. “What happens is the trees cross over and then there’s a build up of debris all floating down. We pinned it down, otherwise it would have taken the yachts out.”

At the same time the ‘Iona’, belonging to John Archbold was also sunk by floating trees. Together with fellow boat club members he was later able to dig the coble out and he now hopes to repair it. 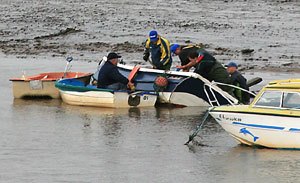 “The boat had quite a lot of sand in it,” he told The Ambler, “but after a lot of teamwork and brute strength, we managed to get it righted and on to the bank side. There was surprisingly little damage. All of the loose articles, oars, rudders and fleeces floated off, but amazingly they’ve all been recovered. The only things I’ve lost are a compass, a gearstick and a tarpaulin. So that’s not bad. When I saw her at 7am on the next morning and she was under the water, I thought I’d lost the whole boat.

“I’ve probably dug two tonnes of sand out and I hope to flush the engine out. I’m going to get advice from the other boat club members, but I think I’ve got a good chance of it starting again.”

Alec was stoical about watching his boat being hit: “As soon as it sunk I just went round the Schooner for a drink!”