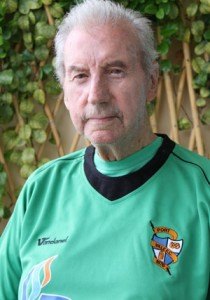 Having reached the ripe old age of  88, I would like to share a few of my earliest memories with you.
I distinctly remember: at the tender age of 3, playing with the outside water tap at 2 Dandsfield Place, Radcliffe, the house where I was born. My mother, Florrie, shouted to me, “Raymond – come into the house at once! You’re ‘shaggy naked’”. I think she must have meant ‘stark naked’.
Lying in bed at night sticking my finger into my mass of blonde, curly hair. I wanted straight hair just like my brothers Frank and George.

Playing on the old Radcliffe ‘pit heap’, near our home, with the ‘girdy’, a tyreless bicycle wheel. That was great fun!
At 4 years old, walking to my favourite village of Hauxley with Granda King. He reached up to pluck off a beautiful red apple from a hanging branch. It was not until we got home that Granny King told me that Granda had had the apple in his pocket all the time. What a disappointment that was.

Granda and I would continue our walk to Hauxley rocks where we gathered giant periwinkles which Granny boiled. To this day, I can still smell and taste those winkles. I doubt if there are any left on those rocks as holiday-makers have ‘ploated’ them over the years.
Moving to Amble, a town with a 5,000 population was a daunting experience. I was now thrust into an unfamiliar world, which I can best describe as a maelstrom of uncertainty.

Starting a new school at the age of 8 gave me a feeling of foreboding, and it was not without good reason. I had met a boy of my own age called Pickering Herbert. Pick and I quickly became good friends. He told me that the head master, Mr Wilson, was a ‘monster’. I soon found out why. To make matters worse, he took the maths class. ‘Maths’, a word that sent shivers down my spine. On one memorable occasion, the class had to work out a question using the large clock which hung above the blackboard. Sitting together, Pick and I looked at each other puzzled. This proved to be fatal as we were both compulsive gigglers. Seeing us giggling, Mr Wilson hauled us to the front of the class to work out the problem. We were so overcome with fear we couldn’t even think.

Pick and I caught each other’s eye and burst out laughing again. This so infuriated Mr Wilson that he yanked us out of the classroom and into his office across the hall. With his long bamboo cane he gave us ‘six of the best’ on our buttocks and bare thighs (we wore short trousers). Red-faced and feeling rather sorry for ourselves, we entered the classroom only to be met by gales of laughter. This further angered Mr Wilson who ordered the whole class into the hall where we had to stand for half an hour in complete silence. Those were indeed ‘happy, happy days!’

I last saw Pick in Durban, South Africa when I was touring with the England team in 1956. He had been working at the Pelaw shoe polish factory. He passed away eight years ago at the age of 80. I’ll always remember him with great affection.
I met Mr Wilson many years later as I was walking along the Warkworth road. He was cycling along and when he saw me he jumped off his bike, came over to me, smiling broadly, and said, ‘Hello Raymond. How are you?’
I’d just signed for Newcastle United at the age of 17 and he told me how proud he was and wished me luck. I did not have the heart to mention the cane!

Ray’s book ‘To the End of the Road’ is available from Amble Development Trust office, £6.99