Why are people ignoring the cycle path? 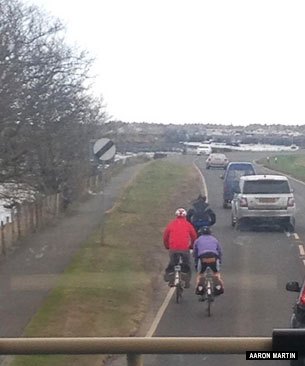 Why do cyclists still prefer to use the main road?

Despite a cycle path and footpath running alongside the main road between Amble and Warkworth, cyclists are opting to use the road itself, causing concern that an accident will occur.

“Anything wrong with the great big cycle path? Morons” tweeted Aaron Martin, who works in Warkworth and recently witnessed traffic having to overtake cyclists on the busy stretch of the A1068 known as Rotary Way.

Aaron, who was travelling on the top deck of a bus, posted a photograph of three cyclists being overtaken by a line of cars. The adjacent cycle lane and footpath was empty.

But cyclists claim the cycle path is dangerous. “Because there are steep hills at each end of that road, you get up a big speed,” claimed one cyclist who didn’t wish to be named. “To join the cycle path at the bottom of Beal Bank, you have to swerve off the main road.”

Another cyclist claimed that sharing the path with walkers, families and dogs was potentially quite dangerous.
“As a leisure cyclist, I am happy to use the cycle path because I can make allowances for walkers using the path, but many cyclists these days are out on a mission and it would be dangerous to encounter pedestrians at the speeds they travel,” said local cyclist Vivienne Dalgliesh.

And cycling enthusiast Mark Breeze pointed out that cycle lanes are not mandatory.

“Just because there is a path doesn’t mean that we have to use it. Its funny how aggressive everyone gets about it. I have been shouted at by motorists and walkers. It seems that as cyclists we can’t win.”

The UK is the worst for respecting other road users
Mark, who owns Breeze Bikes shop in Amble was also critical of some drivers’ attitude to cyclists.

“I spend six days a week riding my bike but most motorists think its because I can’t afford a car! If they have to hesitate for ten seconds to change down a gear, then pass me at a safe distance, that’s not too much to ask.

“I have ridden my bike all over Europe, and the UK is by far the worst for sharing/respecting other road users.”
Despite this, Mark wants to encourage people to cycle more.

“Anything that gets people on their bikes and out of their cars for short journeys is a good thing! The cycle path between Warkworth and Amble is great. Separated from the road, smooth tarmac, no glass, no thorns and lovely views.

“The problem that exists is the fact it’s a shared path. If I go out with the family for a bike ride to Alnmouth we would without doubt use the cycle path. When we are riding along the path we would be traveling at 10-12 mph and taking time to enjoy the views.

“On the other hand if I go out on my road bike I would not use the path. Mainly because I am traveling far faster (20+mph) so passing a walker on a narrow path at that sort of speed would cause a problem. Its also a question of access on and off the path.

“If I go down the Wynd, then have to stop to cross the road, then do the same at the other end, I am putting myself at more risk. It’s far easier and safer to stay on the road and go with the flow of the traffic.”

The coastal road linking Amble to Warkworth and Alnmouth is part of Sustrans’ national cycle network Route 1, which has been the subject of a series of complaints in recent months, with Northumberland County Council refuting allegations that the surfaces of some of the paths are too gritty for cyclists.
Anna Williams

One thought on "Why are people ignoring the cycle path?"