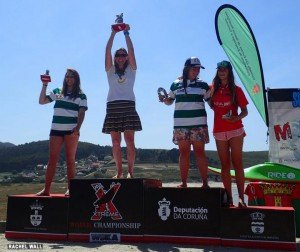 Amble’s Tamsin Green is now on top of the world, in every sense, having won the Women’s World Surf Kayak Championships in Galicia, Northern Spain.

She did this in both classes, the Short and Long boat, having borrowed a long boat to compete as she normally paddles a short boat.

‘I am the only person ever to achieve this,’ she said.

She has now won every event in the sport of surf kayaking and is the only woman ever to regain a title, having won the Short boat World title in 2011 in the USA.

Tamsin won all but one of her heats, achieving a heat score in the top 10 of the entire competition, including the men. 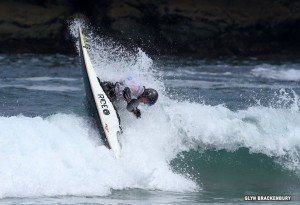 Tamsin’s score placed her in the top 10 of both men and women.

There were 120 competitors from all over the world, including Australia, Brazil, Europe, Costa Rica and Peru.

She also paddled for England in the team competition, helping them to second place,  scoring first place in all her Short boat heats and winning both heats in the team final.

Her husband Dan also had a good competition, finishing with a World ranking of 9th in the individual competition.

One thought on "Double World first for Amble surf kayaker"