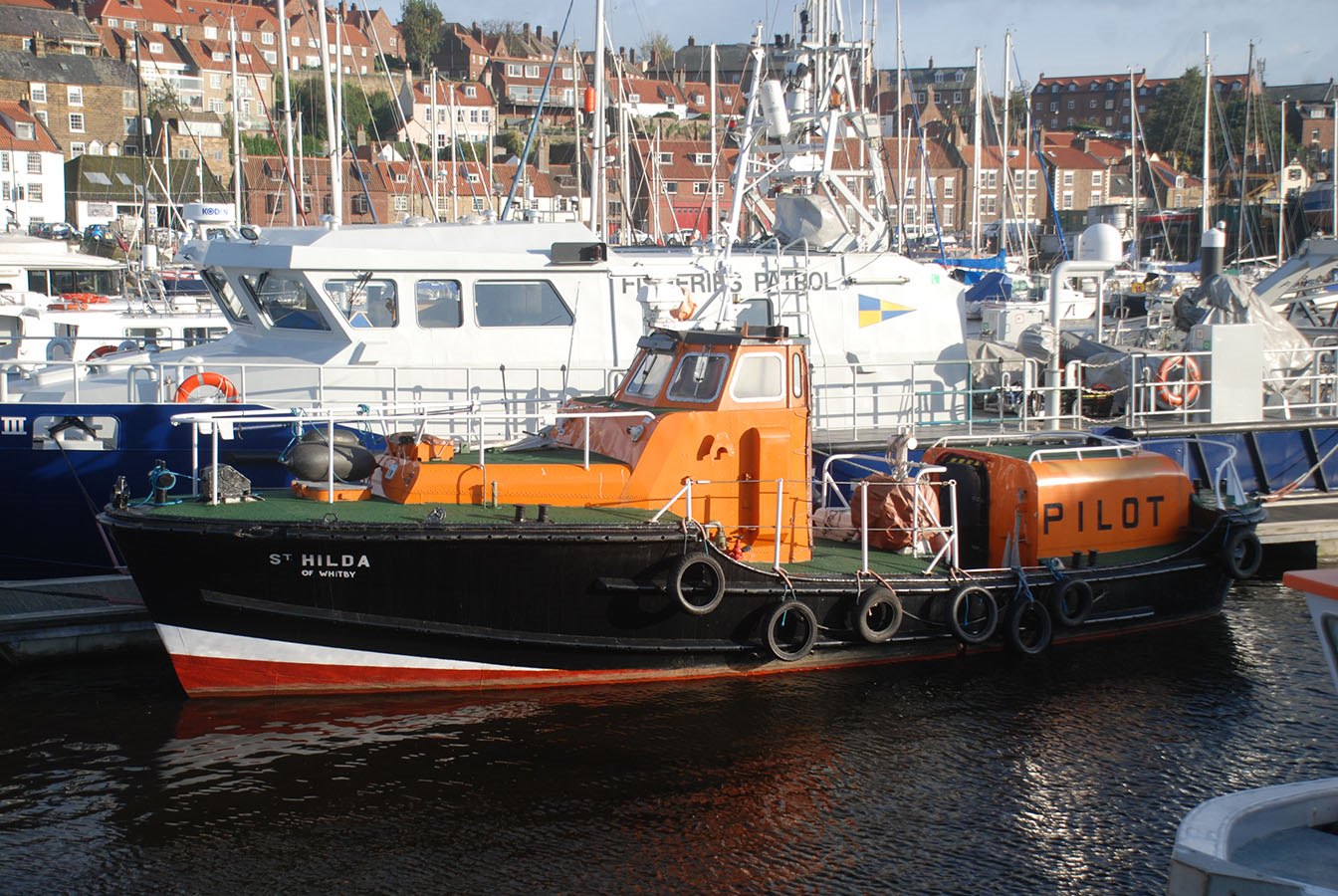 Amble’s former RNLI Lifeboat, the “Margaret Graham” was spotted recently in her new role.
The “Margaret Graham” served at Amble between 1986 and 1999 after which she was sold out of RNLI service. She is now the pilot boat, “St. Hilda” based at Whitby, North Yorkshire, where she was photographed by Tim Kirton on October 16 2015.

The “Margaret Graham” operational number 44-005, was one of the first batch of six Waveney class lifeboats built for the RNLI by Brooke Marine of Lowestoft between 1966 and 1968. The Waveney class was based on a United States Coastguard design and was the first type of “Fast Afloat Boat” (FAB) built for the RNLI, capable of a speed of 14 knots as opposed to approximately 8 knots of conventional RNLI lifeboats of the day.

The “Margaret Graham” was built in 1967 for the Harwich lifeboat station, one of the busiest in the country, where she served until 1980. After six years in the RNLI’s Reserve fleet she was re located to Amble where she became the station’s first “FAB” with almost twice the speed of her predecessor, the 8 knot “Harold Salvesen”. By contrast, Amble’s new Shannon class lifeboat, which is currently being built and will be delivered next year, will be capable of 25 knots.

I spotted the “Margaret Graham” in Whitby Marina. She appears to have been unaltered from her RNLI service days and, I am pleased to say, she looked in excellent condition. The “Margaret Graham” had a long and proud service record and it is great to see that she is still going strong in her new role today.
If you haven’t heard and are interested, Amble’s new Shannon, op. no. 13-16, will be named, “Elizabeth and Leonard”.

Would you host a student over Christmas?

May we appeal to your readers to consider giving the gift of Christmas? Our volunteer local organiser is urgently looking for more invitations to offer to international students at university here, who would much rather experience Christmas in the homes of local people, than on a deserted campus.
Adult students from across the world would love a warm welcome, and to discover what this festival means for us. Invitations for just three nights over Christmas are urgently needed from volunteer hosts, no matter their age, or how far they live from a university, and we will carefully match hosts with a student they would enjoy meeting.
Please see www.hostuk.org for more information or call 020 7739 6292 to be put in touch with a local organiser.

Thank you from Kate

A huge thank you to friendly patients and colleagues for all the cards, gifts and good wishes following my recent retirement from District Nurse.
Also to those who supported me and gave so generously to leukaemia research following the Great North Run.
Thank you,
Kate Appleby
The Croft, Longhoughton

I think for your folks at Christmas time
they may struggle to get by,
but they want their children to smile not cry.
How they manage to make my
Christmas great.
I will never know even now I feel guilty and cry.
Norman Clay
Dolphin Court, Amble