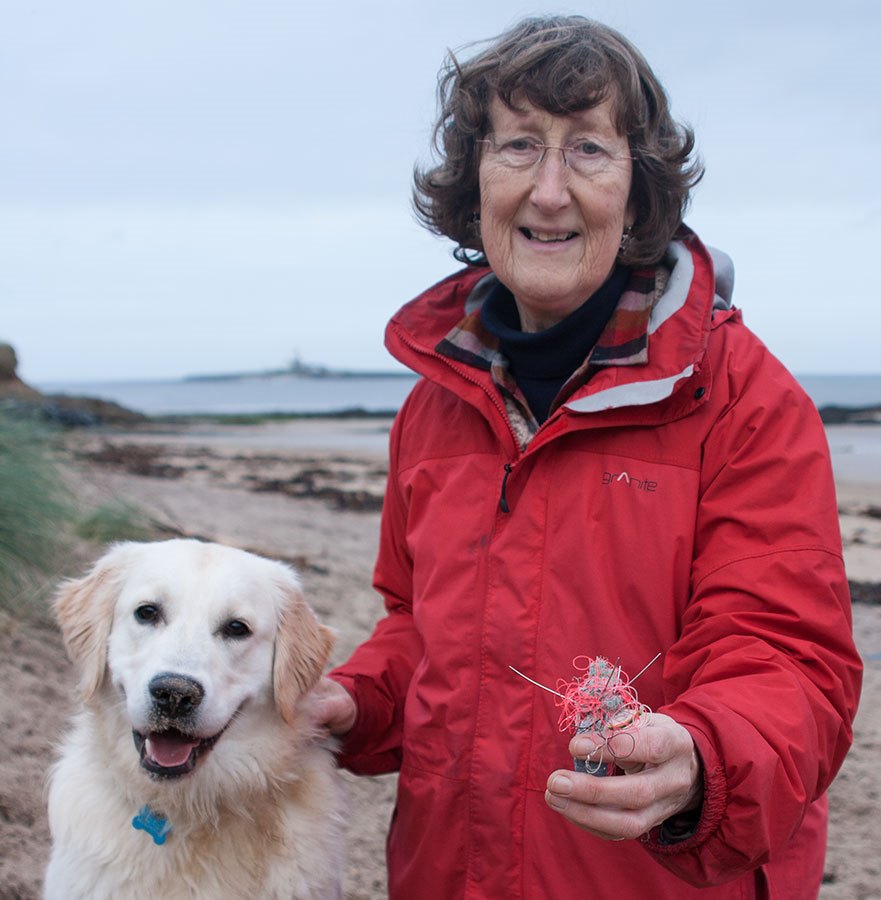 Lesley Burton and her dog Teddy, with the barbed fishing weight

A dog walker has warned others to beware of discarded fishing weights, which could potentially hurt anyone on the beach.

Lesley Burton, who has recently moved to Amble, was walking her dog on the beach at Hauxley, when she spotted the lead fishing weight which had sharp metal spikes sticking out of it.

“It’s lucky I spotted it,” she told The Ambler. “ Because of the red wire, I saw it before my dog could stand on it and get hurt.”

When she got back to her car, Lesley noticed a second weight had been placed on a fence, presumably found by someone else and placed out of harm’s way.

“These are potentially dangerous to anyone with bare feet, and to dogs,” said Lesley. “I don’t know how they come to be washed up. Is it an accident?”

Les Weller, secretary of Amble Angling Club told The Ambler that there were several scenarios which might lead to the weights being found on the beach.

“There’s no one simple answer,” he said.  “Some get caught in the heavy kelp and the angler loses his weight, and after a big sea and big tides, the kelp is washed in with the offending article.  It is common for some old boys to walk the beaches after a blow looking for the lead.

“Another possibility is the angler’s line has snapped when casting, or he has lost/ misplaced them whilst fishing at night. Weights are not cheap, so no one would just discard them purpose. In fact many anglers will go back the next day at low water to retrieve lost tackle, a lead weight is about £2”

Les was keen to point out that fishing tackle is not the only potential hazard on our beaches.

“My dog has cut his paw on glass twice now in the dunes at the Southside of Alnmouth, due to broken beer bottles. Needless to say I do not go there anymore.

“And what can you say about the dog muck that plagues all the beaches and often the pier around here?  And some anglers – like many other people – do not take care with litter.

Les has advice for anyone who finds discarded lead weights on the beach:

“The best way to dispose of them is give them to an angler or drop them in the local tackle shop; they can be re used or melted down to make more. I would be happy to take them.”