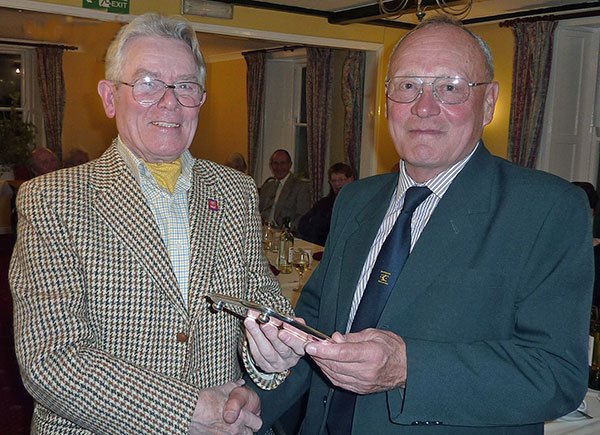 Rotarians from Amble and Warkworth turned out in force to attend the Memorial Service for Rotarian Allan Richmond.

Allan was a native of Pately Bridge and was a member of the Rotary Club of Pontefract from 1970 to 1977.
He worked for Huwood Mining Engineering Company and became a Director of the company. He was awarded the MBE for services to the mining industry.

On his retirement to Warkworth, Allan rejoined Rotary and was President of our club in 2000-2001. Along with another club member he was jointly instrumental in negotiations which led to the naming of “Rotary Way”.

Allan will be missed in the club for his wise counsel and ever present sense of humour. He leaves a widow, Carole, sons John and Graham and five grandchildren.

Change of venue
On 2 September the club decided to move their weekly venue from The Sun Hotel, Warkworth to The Old Storehouse in Amble.

Members of the club paid their annual visit to the Rotary Club of Seahouses on 9 September. The following week, meeting at the new venue for the first time, the speaker was Rotarian Alan Jones who spoke of the many overseas Rotary Clubs he had visited during his career.

The new District Governor, Rotarian Jean Thompson paid her first official visit to the club and congratulated members for the work they do for the community and for international projects.

John first won this trophy in 1972, his father having won it on six previous occasions between 1953 and 1965.
Fred Calvert