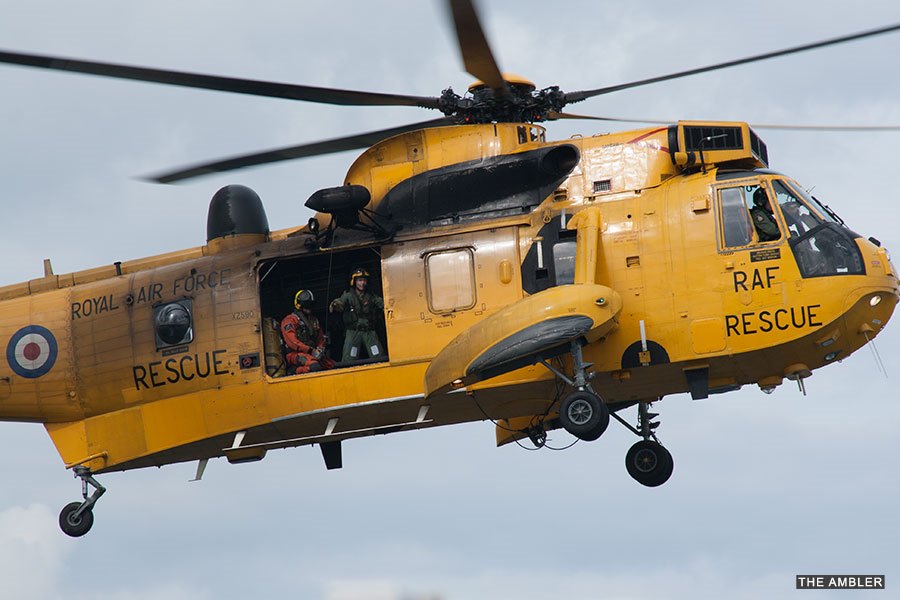 Crowds at Amble Harbour Day were able to watch one of the last rescue demonstrations by an RAF Boulmer Sea King.

The iconic yellow helicopters ended their 40 year service at the end of September.

The government’s decision to axe the search and rescue (SAR) cover by 202 Squadron at RAF Boulmer has been met with sadness by many local people.

The Ambler spoke to Engineering Shift Manager Dan Green who worked on the Sea Kings at Boulmer for nearly eight years, and for whom the Sea Kings were always a part of his life.

“It’s going to be a miss. I think in some sense we’ve all taken it for granted that they’d be there. I remember looking at the Sea Kings as a child in my uncle’s fishing boat at Newbiggin. And then when I was in the Army as an avionics engineer, I thought working on the Sea Kings at Boulmer would be my dream job.” 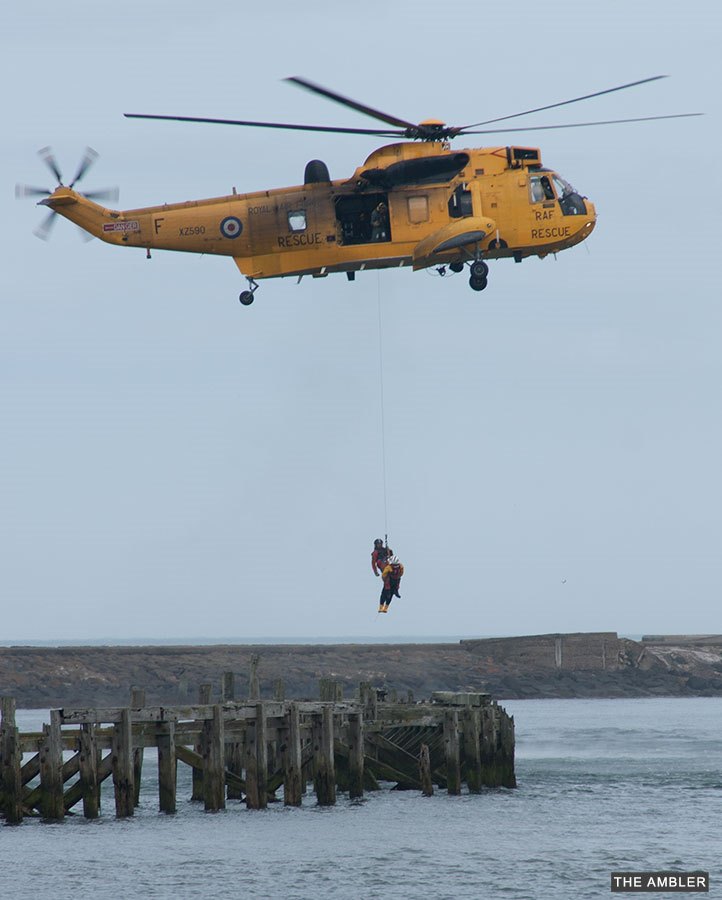 Just as we’re talking there’s a noise overhead and Dan moves the phone away for a moment. “The last Sea King is actually flying over my house right now,” he tells me.

Is he emotional about the end of the SAR at Boulmer?

“Oh definitely, and I know there’s a lot of ‘rough tough’ blokes that will probably have a tear in their eyes.

“I think the overriding memory I will have is of the camaraderie. You would just drop everything to focus on getting the aircraft to respond at any time. The ethos of the crew and engineers was second to none… their willingness to do their job in any conditions or time of day. I don’t think anything will replace that.”

Most of the helicopter engineers and crew at Boulmer have found alternative work – though often at great distances from Northumberland. Dan now commutes on a week on, week off basis to Aberdeen where he works for helicopter company CHC Scotia.

“There’s now no real aircraft engineering in the North East,” said Dan. “It’s quite a changed industry. Some of the engineers are now making trains in Newton Aycliffe.”

A privately-run search and rescue service owned by US company Bristow will replace the Sea Kings. The new Sikorsky S-92 helicopters will be based in Caernarfon, Prestwick and Humberside, and run via the Coastguard Agency.

Dan is cautious about the change: “It leaves a massive empty hole in the North East. The new helicopters are faster aircraft, but if those aircraft are elsewhere, you can’t replace the fact that there used to be an asset in Northumberland.”
Anna Williams

One thought on "Sadness as Sea Kings leave RAF Boulmer"