Tour of Britain comes through Amble

Well wishing crowds cheered and clapped as the 2017 Tour of Britain race powered through Amble as part of Stage 2 of the race.

The riders showed how much effort they were putting in as they climbed the Wynd, before curling around the Wellwood corner, then pushing on down Albert Street and out past the Industrial Estate. The breakaway group were followed a couple of minutes later by the peloton and dozens of support vehicles and police motorbikes. 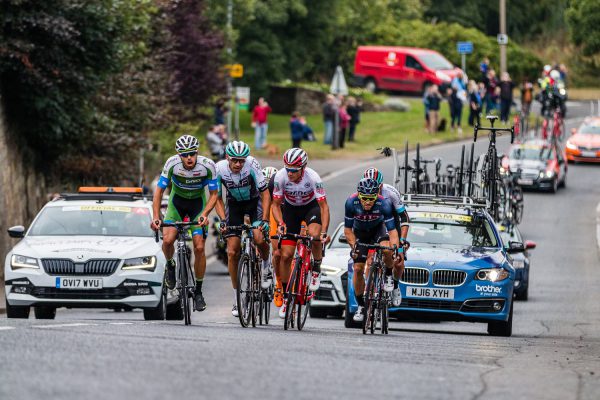 Powering up the Wynd. Image by Andrew Mounsey

Spectator Ethan Sales aged 9 watched the race at the fish roundabout with his Grandad and Granny.

He said “We were there for ages. Some traffic was still driving on the road, so the policeman had to chase after them.

“I was excited when I saw the riders come through Amble. I was cheering. The cars came through beeping their horns, one of the motorbikers were talking to the crowd and told them to cheer.

“There were about five cyclists went through first, and then about one minute 54 seconds later (my Grandad had a stopwatch), the rest of the cyclists came through. And that was it. I was glad I went to watch, even though it was all over quickly.”

Stage 2 on 4 September saw the teams start in Kielder and end in Blyth, a distance of 211 km. 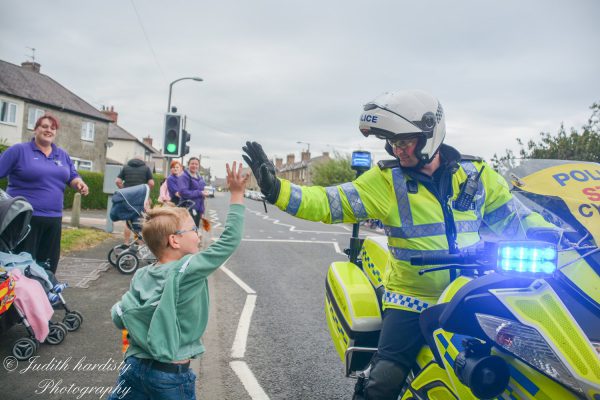 Police riders were interacting with the crowds. Image by Judith Hardisty

A last minute controversy saw the Stage 2 win taken from declared winner Edvald Boasson Hagen of Team Dimension Data, and given to Italy’s Elia Viviani of Team Sky. The judges cited ‘irregular sprinting’  by Boasson Hagen, as the reason for the overturned decision.

“I know that I closed in Viviani but it wasn’t on purpose” said Boasson Hagen after his relegation.

The 2017 race began on 3 September from Edinburgh and will finish in Cardiff on 10 September.