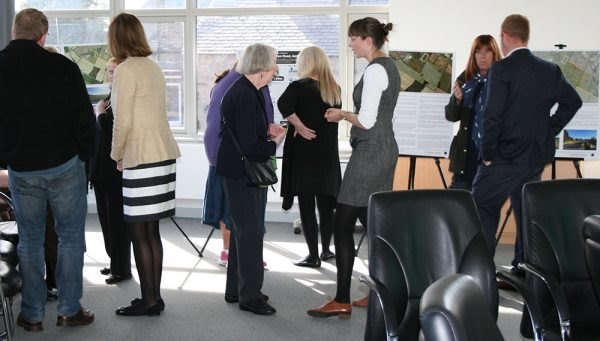 The public consultation for the development drew large crowds

Outline planning permission has been granted for the development of up to 500 houses on land off Acklington Road, adjacent to James Calvert Spence College.

The proposal by Hindhaugh Homes was given the green light by Northumberland County Councillors at the strategic planning meeting in September.

Several conditions were imposed on the plan, including a new junction into the estate, and the widening of Acklington Road to accommodate a ghost right-turn lane and a pedestrian refuge.

Councillors noted residents’ concerns about the potential increase of traffic on Acklington Road, and added a condition that Hindhaugh Homes should extend the estate road to the edge of its boundary.

They also stated that county council officers would work with another developer on an adjacent site, to develop a link road from the estate to the A1068.

Councillor Jeff Watson said he was pleased that the proposal for a link road had been included in the decision. “This proposal was that the approval be conditional on the developer constructing a full size road from Acklington Road to the far side of the development. This condition will allow a link from the A1068 and other forthcoming developments so that traffic going to and from the development will be able to avoid the Masons corner.”

Chair of Amble Business Club Ann Burke was positive about the decision. “I think it’s great for Amble, and I believe it will mean more people will use the independent shops in the town.”

Amble’s Mayor Jane Dargue said “I am pleased to note that some of the concerns expressed by the Town Council and the community were recognised by imposing conditions to try and alleviate them – such as changes to Acklington Road and safer pedestrian access to the schools. It is also encouraging that the developer will extend the internal road through the whole site and that the Strategic Planning Committee asked NCC officers to hold discussions with adjacent developers about the future possibility of a link to the A1068, which we had suggested should be investigated.”

But criticism was levelled at the development, saying it did not provide what Amble needs.

Councillor Terry Clark told The Ambler: “This plan did not tackle the basic problem – the type of houses. What is needed is affordable rented starter homes for young couples and single people, bungalows for our older generation. Housing should be about homes for the many, not investment opportunities for the few.”

Calls for improvements to Amble’s infrastructure were also voiced. Julia Aston, director of Amble Development Trust said “We welcome further investment in the town. However there is the need to ensure the infrastructure can cope. As the town grows infrastructure improvements will follow. As with any business, if there is an identified need, someone will spot an opportunity and provide that service.

“However, there are other improvements that require co-operation between developers and planning officers to ensure these are provided, and it is up to county councillors to enforce, for example, healthcare (along with local care trusts), education and road infrastructure. Once these are agreed then surely the town and businesses can only benefit from increased activity.”

Detailed plans such as the estate layout, number and types of houses, will be submitted to planning at a later date.
Anna Williams