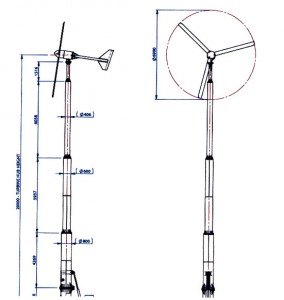 The proposed turbines would be 23.5 metres high

The scheme is part of a County Council project to install micro wind turbines at schools, depots and fire stations. The County Council’s energy and sustainability team has submitted the plan, which has gone out for consultation.

The turbines, which would be 23.5 metres to the tip would be sited behind the college buildings near Amble Welfare and away from Acklington Road.

Designers say their make and height have been chosen to minimise visual impact. They say the project will help the school reduce its need for fossil fuel generated heat. Any surplus energy would be fed back to the National Grid and provide renewable energy to nearby properties. 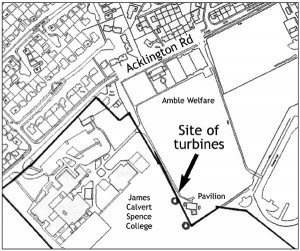 The County hopes to make a recommendation by mid-August.

A proposal to install a biomass boiler and associated plant, including a 6.5m silo in the school grounds has also been submitted.

Do you live near the proposed turbines? What do you think?

One thought on "Wind turbines planned for JCSC"