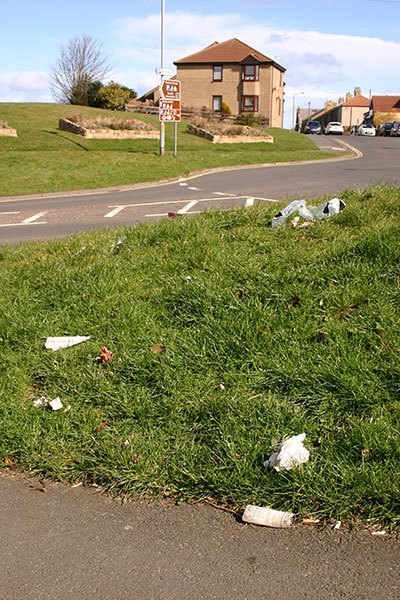 Litter is always an emotive subject, but there can be little doubt that there has been an increase in the amount of rubbish blowing around our nooks and crannies.

The Ambler is asking readers to help stop this slide into neglect with a KEEP AMBLE TIDY campaign.

But here’s the thing. After decades of national ‘Keep Britain Tidy’ campaigns, why are we still dropping litter? Why are we still too lazy to ‘Bag it and Bin it’? Why do people still drop cigarettes and food packaging?

But let’s be fair, this is not an attack on kids or ‘drive thru’ fast food addicts. The amount of rubbish strewn around paths and hedges, in Amble and much further afield, is way beyond being the fault of a few selfish individuals. Anyone who has recently travelled to Newcastle via either the A1 or spine road, surely will have seen the hedges and verges strewn with plastic, paper and general rubbish.

A spokesperson for Northumberland County Council said “In Amble we have introduced a regular mechanical footpath sweeper which is an increase in service on previous years. There is a team based in the town which carries out a range of street cleansing and grounds maintenance activities.

“On the A1 and all main trunk roads through Northumberland, we are pulling a programme of works together for clearance. So far we have cleared over 20 tonnes of litter and will be working through the season to remove even more.”

The council say they urge people who have issues with litter to get in touch with them, so they can take action.

In some places in the UK you can be issued an on-the-spot fine for littering – even for dropping cigarette stubs. Is this the way forward?

“Tackling litter is a priority for the council. Those that are caught dropping litter will also face action – we’ve already taken a number of people to court this year and won’t hesitate to target the small minority who have no respect for the county,” said the spokesperson.

We know litter is a subject which annoys a lot of our readers, so we are asking you to help us start a KEEP AMBLE TIDY campaign. We’d like to encourage everyone; schools, offices, community groups, sports teams, friends and neighbours. Please let’s make the Friendliest Port the Tidiest port.

Amble Town Council are holding a Community Cleanup on May 20. You can pick up litter-picking equipment from Fourways2 at any time between 10am and 3pm, or meet in the Town Square at 5pm for about an hour’s litterpick.

And as a final request, what is the best way of confronting someone who has just dropped litter?

Send your thoughts to editor@theambler.co.uk or join in the conversation on Facebook.

One thought on "Litter bugs move into Amble"