Commemorating the Battle of the Somme 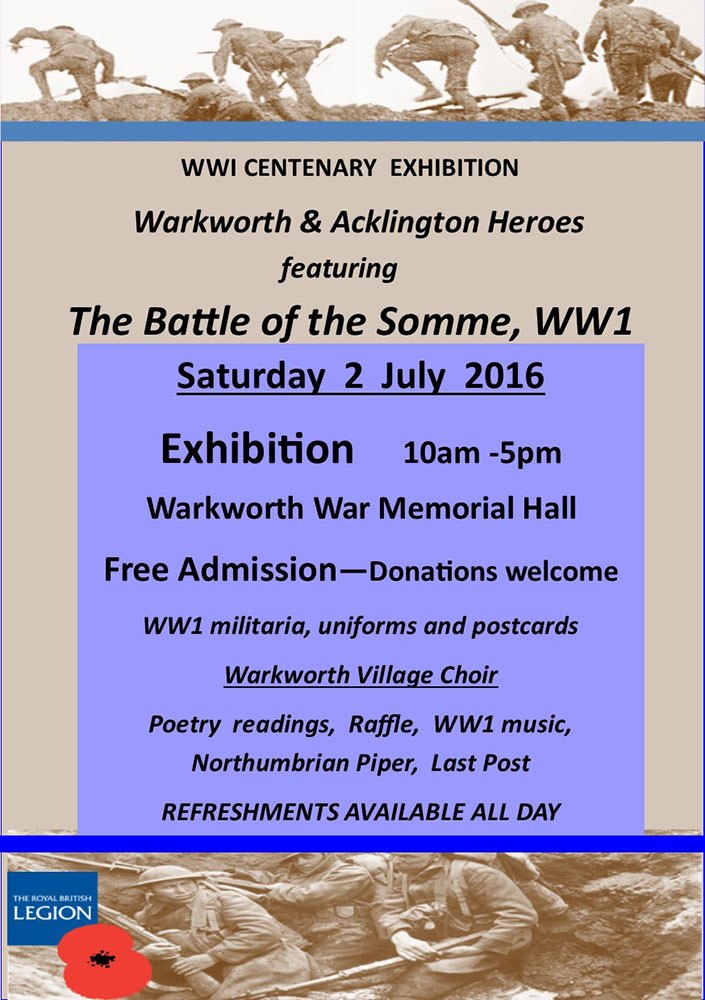 In August 1914 hundreds of men from Warkworth, Amble and Acklington districts aged between 18 and 41 responded to Kitchener’s call to arms at the outset of the Great War. For these men, and their families from our close knit communities, their lives would never be the same.

The Pals Battalions of the Tyneside Irish and Tyneside Scottish Regiments of the Northumberland Fusiliers were decimated on the first day of their first major engagement at the Battle of the Somme on 1 July 1916.

20,000 soldiers of the British commonwealth were killed on this day of the battle alone with 38,230 recorded as wounded or missing.

The Thiepval Memorial at the Somme, France lists the names of soldiers with no known grave. It now has a purpose built museum to record the personal data of each soldier who is named on the memorial.

Newcastle
For this centenary year the Royal British Legion is holding special commemoration ceremonies. There will be an all-day vigil in Newcastle Cathedral on Friday, 1 July 2016 starting at 7.28am (the time the battle commenced) with a large screen film of the ‘Battle of the Somme’ showing events as they happened. On Saturday, 2 July 2016 at 2pm there will be a Somme commemoration ceremony at the Renwick War Memorial in the Haymarket, Newcastle.

Locally
Warkworth & Amble District RBL Branch will be holding a short commemoration service at the War Memorial at 11am on Friday 1 July and lay a wreath. Saturday 2 July: a special ‘Battle of the Somme’ exhibition to commemorate the lives of soldiers from Warkworth and Acklington at Warkworth War Memorial Hall, 10am -5pm.

The Riders Branch of the Royal British Legion will be holding an all-night vigil in Amble Town Square to commemorate all the soldiers from the area. They will start with a service of dedication at 7.15am on Friday, 1 July which will see a candle lit at 7.28am. This will burn until 11am on Saturday 2 July concluding with a remembrance service and the extinguishing of the flame following a minute’s silence.

The public are invited to attend all these events and can purchase candles or crosses to pay their own respects. All proceeds raised will go to supporting the Royal British Legion Poppy Appeal.

One thought on "Commemorating the Battle of the Somme"