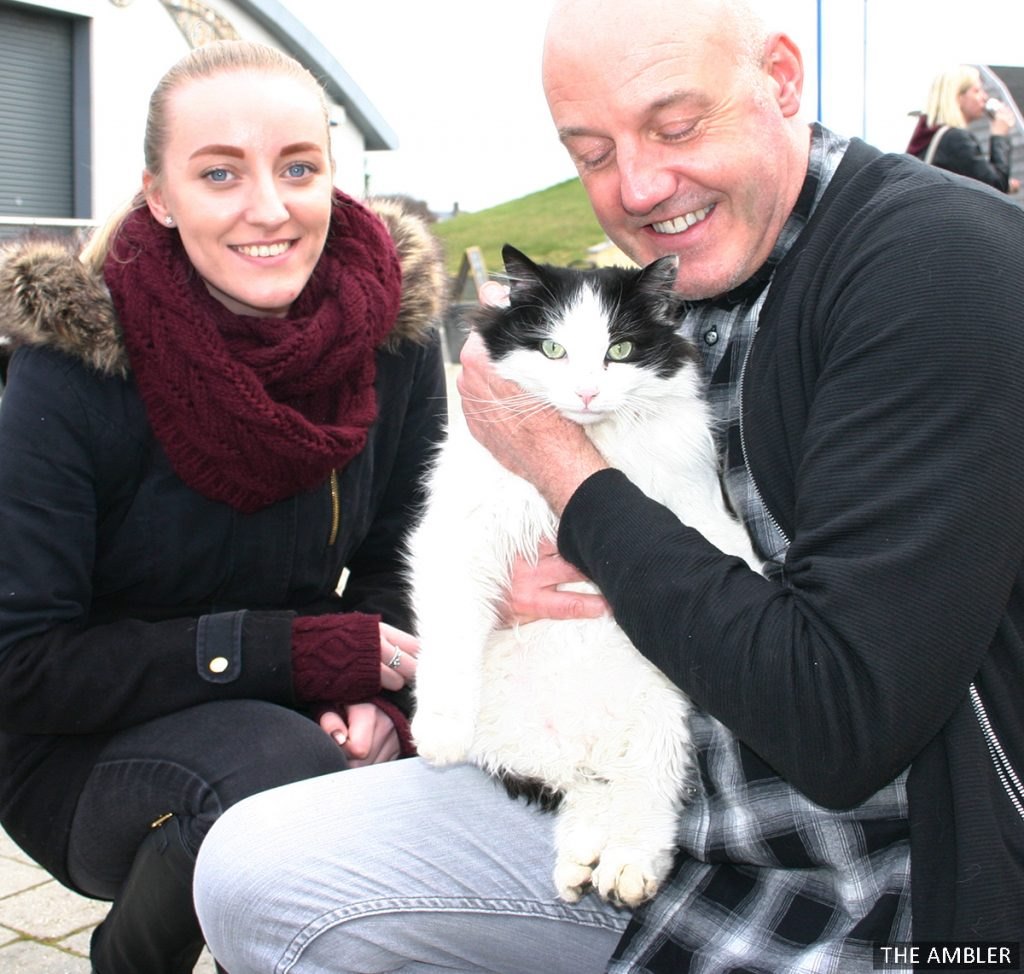 Laura Stubbs and Ashley Sims with Oscar the Pod Cat

Oscar the Pod Cat has been looking a bit shabby of late. Pod owners at the Harbour Village were concerned to see his coat was quite matted and decided to take him to the vet for a health check.

And people from far and wide have donated money to help with vet bills for the cat, who is often to be seen around Amble harbour. Oscar was ‘adopted’ by the pod owners after they suspected he had no one official home.

Coquet Cosmetics pod owner Laura Stubbs said, “We were a bit concerned about him so we took him to AlnNorthumbria vets in Amble. He got a general health check; the vet checked his eyes, ears, teeth etc. The vet estimated  Oscar is between 4-8 years old. He’s been neutered in the past, but he’s not chipped.”

Knowing how expensive vet treatment can be, a crowd funding site was set up to help with any potential bills. Laura set up the Go Fund Me page and was amazed at how quickly the donations came in for Oscar’s wellbeing. “I only set it up the night before, because people who don’t live in Amble were telling me they wanted to help. Everyone’s asking how he is. We’ve even had people coming to the Harbour Village bringing money for him.”

The prognosis is that Oscar is healthy apart from being overweight and needs to go on a diet. The popular cat has no fixed abode, but is a regular visitor to the Harbour Village, where he is fed, watered and generally admired. His fans live far and wide; one lady from Liverpool regularly rings to check up on his welfare.

But Oscar’s popularity has its drawbacks. “I think all his visitors feed him treats,” said Laura. “I think he has several homes, and places he visits.”

Ashley Sims, co-owner of P Pod said “Basically, he’s too fat and he can’t groom himself properly. That’s why he’s looking a bit bedraggled; he can’t get round to groom himself!”

So instead of giving him treats when they see him, Oscar’s fans are being encouraged to give his coat a brush instead.

Laura said “He quite likes being brushed. He was perfectly happy being checked over at the vets, and we’re pleasantly surprised  that he is ok, considering he lives outside. All the money raised and donated will go for Oscar – he’s on the Healthy Pet scheme at AlnNorthumbria vets, and we’re going to look at taking out some insurance.”

Oscar’s Go Fund Me site can be found: https://www.gofundme.com/oscars-vet-bill

2 thoughts on "Oscar the Pod Cat officially a fat cat"